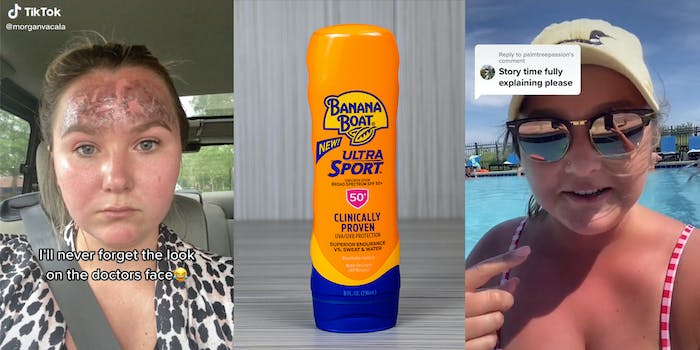 'It felt like fire ants had stung me all over.'

A woman’s TikTok has gone viral after she said expired sunscreen burned her face.

In a May 25 video, Morgan Vacala (@morganvacala) said she got a second-degree burn on her forehead after using expired sunscreen.

The video, which had 5 million views by Tuesday, shows photos of Vacala’s progress healing from the burn. “Yup, that’s me,” the popular audio attached to the video says. “You’re probably wondering how I ended up in this situation.”

“I’ll never forget the look on the doctor’s face,” Vacala wrote in a text overlay.

In a subsequent video, Vacala said the incident happened in May 2021 when she used expired Banana Boat sunscreen. She also said the burn took two to three weeks to heal.

“I grew up boating and always in the pool. Never had an issue burning like this,” Vacala wrote in a text overlay in a follow-up video posted on June 2.

Some commenters said the video made them more aware of sunscreen’s shelf life.

“You just saved my family from major burns,” one user wrote. “Day 2 of vacay and just reached over to the beach bag and they’re all expired.”

According to the Food and Drug Administration, sunscreen should not be used past the labeled expiration date. If there is no expiration date, FDA guidance says sunscreen lasts up to three years after purchase.

Several users said they had similar experiences with Banana Boat sunscreen, even if it hadn’t expired.

“I had a reaction to Banana Boat. It felt like fire ants had stung me all over & it wasn’t expired. The dr thought the bb preservative was the issue,” one user wrote.

Another commenter said, “Banana Boat is (the) worst. I don’t know a single person that can use it without burning.”

The Daily Dot reached out to both Banana Boat and its parent company Edgewell via email but did not hear back before publication. On its website, Banana Boat says its sunscreens remain effective for three years from the date of manufacture, which can be found on the bottom of the product or label.