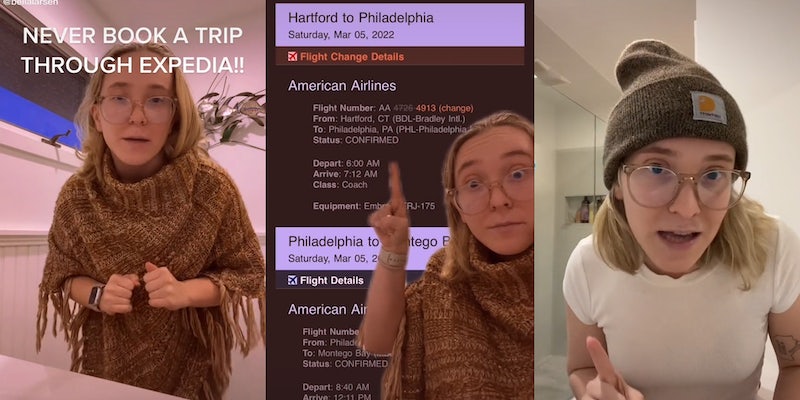 'So many people have had problems with you that never got resolved.'

A young woman has taken to TikTok to call out third party travel agency Expedia for allegedly canceling her confirmed flight, refusing to reimburse her, and sending her another customer’s personal information.

In a video that has garnered more than 662,000 views on the platform, Bella Larsen (@bellalarsen) shares her experience with Expedia, urging viewers to avoid using the agency when booking flights.

“I have been on the phone with Expedia customer service for over six-and-a-half hours now because Expedia fucked up and canceled my flight, and is not taking responsibility for it,” she says. “I had to spend $400 more than I already did to get a new flight… I find out my flight is canceled. Mind you, I have all the receipts too, everything proving that this is their fault. The reason they canceled my flight is because I never ‘confirmed’ my flight change. The time didn’t change, the plane didn’t change, all that changed was the flight number. It says confirmed right here.”

She says that customer service representatives told her that she was supposed to contact them regarding the flight number change, but that she received nothing communicating this to her. She was also allegedly sent personal information for another customer booking a completely different flight across the country.

“This is the flight they sent me. My name is Bella, I was leaving on March 5, I was going to Jamaica, and he knew that for the entire time we were on the phone for three-and-a-half hours talking,” she says. “I told him a million times on March 5 I’m going from Connecticut to Jamaica. Kiko, if you want to know, they breached your contract and sent your personal information to me.”

She then says the customer service team reached out to her stating that because they had notified her of the confirmed flight change, they would not reimburse her.

“Your customer service is absolutely garbage,” she said.

In an update to the first video, Larsen says that Expedia told her they would issue a refund, but that it could take up to 15 days for her to receive the funds. Repeatedly, she states that she would not take her video down until she receives this money back, and it is unclear whether or not she has been asked to do so.

“Your bad customer service, your breach of contract with people is enough for me to tell people to never use you,” Larsen says. “Expedia, look at all the comments in my video. So many people have had problems with you that never got resolved. I’m just lucky enough I had the balls to come on social media and call you out on your fucking bullshit.”

@bellalarsen Reply to @bellalarsen Don’t let these companies take advantage of you! I am so sorry to all you who has similar stories. thank you all for your support. follow along to see how the rest of the trip goes and how my future travels go #expedia #scammed #part2 #update #fyp @expedia ♬ original sound – Bella Larsen

Commenters shared their experiences with Expedia, which often ended poorly, as others swore off using the company to book any future trips.

“I book a two week honeymoon in 2019 for May 2020 attempted canceling February 2020, they would not cancel,” the commenter wrote. “After two years of back (and) forth they’re only giving me a portion of my money back. It’s been a nightmare, I will never use them again.”

“They scheduled and booked my mother-in-law and father-in-law with a hotel that hasn’t been in business in three years,” another commenter wrote. “They only found out a day before their trip and only because they wanted to look at the hotel so they Googled it instead of using the Expedia website.”

“Expedia left us stranded at a hotel before because their company payment card was denied to pay for the room,” a commenter wrote. “We had to pay ourselves and then get a refund.”

Expedia has been previously called out on TikTok for a rebooking error that caused one user “emotional distress.” One TikToker told the Daily Dot in February that Expedia customer service accidentally canceled her return flight after she rebooked it, and subsequently tried to charge her over $1,000 to get a new ticket. In response to this video, Expedia told the Daily Dot “our agents are human and mistakes unfortunately can happen.”

The Daily Dot has reached out to Larsen via comments left on her video and Instagram DM, as well as to Expedia via email.

Update 3:47 pm CT March 7: An Expedia spokesperson told the Daily Dot the company apologizes for the “stress and frustrations” it caused Larsen. The spokesperson said it was a system and human error that should have “been caught right away.”

“We strive to deliver the best service and experience to our travelers and when we do catch instances of poor service, we do best to rectify the situation as quickly as possible and do a thorough investigation of any errors to try and minimize these issues from happening again in the future,” the spokesperson said.

They said it was a system error that caused her flight not to go through, resulting in a cancelation by the airline. The spokesperson said the company has informed its tech team to fix the mistake.

In response to the other passenger’s flight being shared with Larsen, the spokesperson said: “We take the privacy and safety of our travelers very seriously. While we are still investigating the full details of how the extraneous information was shared with Bella, unfortunately it seems like this was a case of human error on the part of the agent assisting Bella. Regardless, we want to assure Bella and our customers that their data privacy is essential to us and we will continue to evaluate and improve the technical and organizational measures we put in place to protect personal data and prevent this from happening again.”