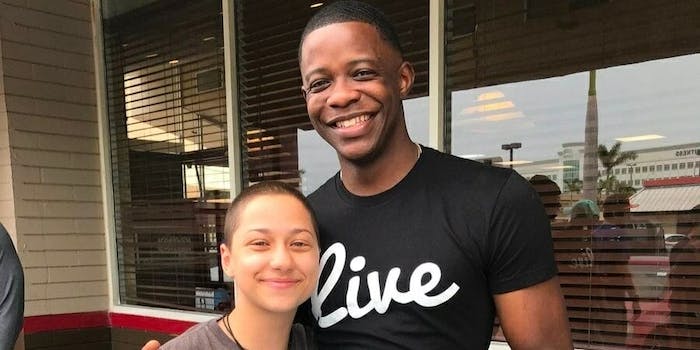 Parkland shooting survivor and activist Emma Gonzalez recently met James Shaw Jr., the man who thwarted a shooter at a Waffle House last month that likely saved the lives of many customers.

Shaw is Gonzalez’s hero, and Gonzalez is Shawk’s hero as well. And the two couldn’t help but praise each other on their respective Twitter accounts.

Previously, after Kanye West had declared that Gonzalez was his hero …

… She paid it forward by declaring her admiration for Shaw.

The two met Saturday along with other Parkland shooting survivors-turned-activists who are seeking more gun control measures after a gunman killed 17 people at Stoneman Douglas High School in Florida in February. Shaw disarmed a gunman who had already killed four people at a Waffle House in Tennessee last month, and he’s since raised hundreds of thousands of dollars for the shooting victims and has become an activist in his own right.

After meeting the students, Shaw also tweeted out another photo of the group, writing, “Meeting the young adults of the Parkland incident so much fire and inspiration in their eyes was a great joy … Thank you great meeting you all, let’s keep inspiring and bringing ppl together.”

Meeting the young adults of the Parkland incident so much fire and inspiration in their eyes was a great joy pic.twitter.com/DLPJ01K8e2

Shaw traveled to Florida to meet with students, and afterward, David Hogg, another Parkland survivor and activist, tweeted, “Lots of work ahead but the young people will win.”

According to ABC, Shaw was wearing a shirt with “Live” on the front. It’s made by a Nashville-based company called Live Above, which is donating its profits to the James Shaw Jr. Foundation to help the Waffle House attack victims.