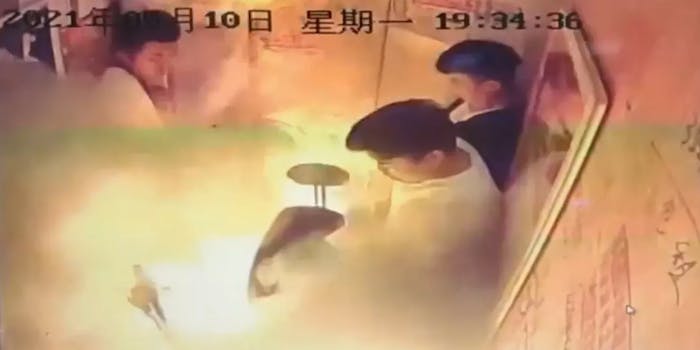 A viral video from China shows five people, including a 5-month-old baby, injured after a battery on an electric bike caught fire and exploded inside a residential elevator on Monday.

According to Global Times, all five victims were hospitalized, and two, the baby and her 55-year-old grandmother, in an intensive care unit. The grandmother reportedly had burns on 75% of her body.

The security camera footage was viewed over 20 million times on Weibo, China’s biggest social media platform, before going viral internationally. The video shows a packed elevator that was filled with smoke, shortly followed by a blazing inferno from an exploding electric bike battery.

The elevator video was taken in Chengdu, in the Sichuan province, located in southwest China. The Global Times also described “numerous reports” of similar battery explosions and burning electric bicycles. One incident was fatal.

The Chenghua District emergency management office said an investigation is ongoing, and officials are looking into whether the bike was illegally modified.

The Times said in a video tweet that various cities have taken action. In a Shanghai community elevator, newly deployed tech prevents the elevator doors from closing if the device detects an electric bicycle inside.