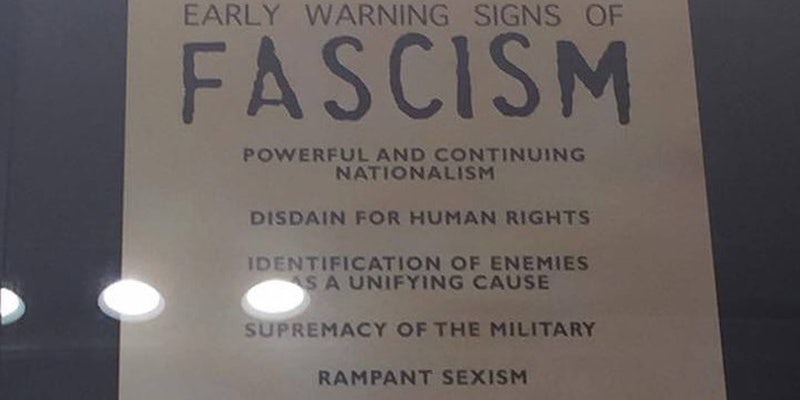 Anything ring a bell?

The mantra of avoiding another Holocaust has been all over the web lately as a splintered America struggles to keep a horrific past from becoming its present. But a viral photo from the Holocaust Museum makes those echoes between Nazi Germany and the present-day U.S. sound louder than ever.

Sarah Rose posted a photo of an “Early Warning Signs of Fascism” poster to her Twitter timeline early Monday afternoon. As of press time, it had been retweeted 19,000 times and liked by 20,000. The card is a simple list of identifying features of a potentially fascist regime, controversially created by Laurence W. Britt in 2003. It’s now available for sale several places on the web, so it’s not exactly a Holocaust Museum exclusive.

Still, some Twitter users were quick to note the parallels with modern-day America, even turning the photo into something of a checklist.

@emmapiperburket Disturbingly familiar, but somehow the recognition always seems to come too late.

Incidentally, the official day of remembrance for Holocaust victims was Friday. President Donald Trump issued a statement on that day but neglected to include any mention of Jews or other victims of the genocide. That same day, he signed an executive order banning the immigration of residents of seven Muslim-majority nations in the Middle East.

For its part, the U.S. Holocaust Memorial Museum issued a statement on Holocaust Remembrance Day that solemnly recounted the “systematic, state-sponsored murder of six million Jews by Nazi Germany and its collaborators.”

“As Elie Wiesel said, ‘Not all victims were Jews, but all Jews were victims,’” the statement reads. “The Holocaust teaches us profound truths about human societies and our capacity for evil. An accurate understanding of this history is critical if we are to learn its lessons and honor its victims.”

Update 4:18pm CT, Jan. 31: The Holocaust Museum issued a statement today on the refugee crisis, reiterating the stance it took in November 2015 regarding Syrian refugees.

“In our view, there are many legitimate refugees fleeing the Assad regime’s sustained campaign of crimes against humanity and the genocidal acts perpetrated by ISIS against the Yazidis, Christians, and other religious minorities. American policy should fully address national security concerns while protecting legitimate refugees whatever their national or religious identity.”