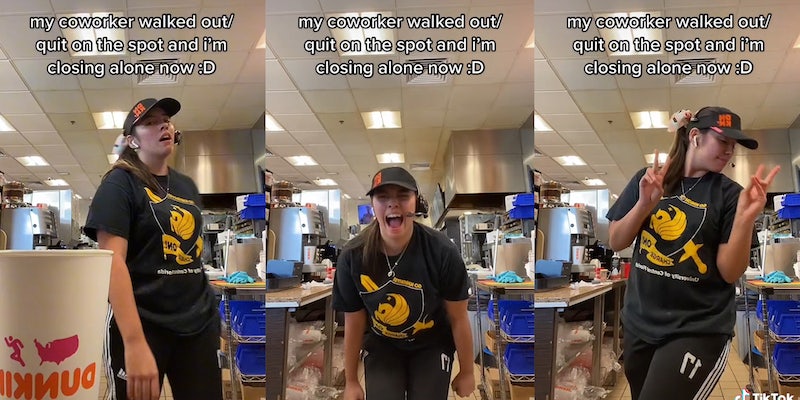 'My coworker quit on the spot and I’m closing alone now.'

Working a service job is no easy task in itself. It can be incredibly physically demanding, and there’s very little time to catch a break, even when properly staffed. So what happens when one of your co-workers decides they’ve had enough and walks out during the busiest hours of your shift?

Apparently, that is exactly what happened to TikTok user Emma (@em.ciaraa) who decided to make a viral TikTok out of it.

In the video, she records herself knocking down a plastic cup and then letting out a scream, before bursting into a dance. Accompanying her dance is a text overlay: “My coworker walked out/quit on the spot and I’m closing alone now.” In the video description, she also added: “yeah i screamed ab 5 difff times for this its fine tho.”

People in the comments section argued over the co-worker’s controversial decision to abandon Emma. Many didn’t approve of the decision, criticizing her. “They could have at least waited, so they don’t disrespect you,” one commenter said.

“My bf did this to someone when he quit Dunkin and I yelled at him and still never leave him alone about it,” another shared.

“They couldn’t have waited? I’d be so annoyed,” a third said.

But others empathized with the co-worker, “dunkin sucks dont blame ‘em.”

“Me looking at this while i quit on my second day working at dunkin,” another commenter jokingly added.

The original TikTok was posted on July 31 and has since accumulated over 115,000 views.

The Daily Dot reached out to Emma via TikTok direct message and Dunkin’ via press email.