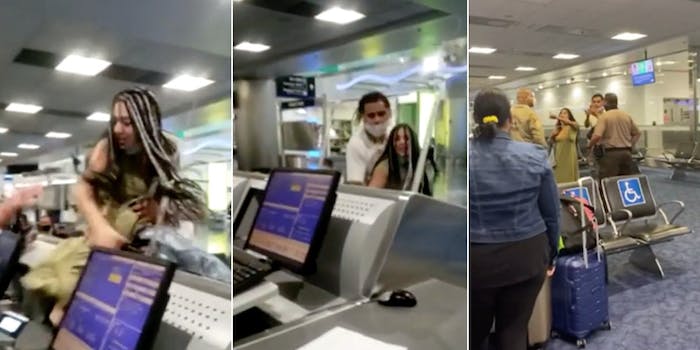 The mayhem started when she tried to board a plane without shoes.

Mayhem ensued at the Miami International Airport when a drunk woman leapt over the ticket counter and attacked the police officers who dragged her and her partner out of the building, according to video obtained by Miami’s WPLG.

The video opens with Brittney Mohammadi hopping over the ticket counter because she and Manuel Arteaga were reportedly denied boarding their flight from Miami to Los Angeles after attempting to get on the plane without shoes.

Arteaga proceeded to yell and curse out airport staff, accusing them of stealing Mohammadi’s shoes. (“That’s your guys’ fault that she has no shoes!”) An intoxicated Mohammadi continued shouting and slurring her words as she walked around the terminal.

Airport employees called law enforcement to detain the unruly couple. Cops warned Mohammadi and Arteaga that they would be arrested if they didn’t calm down and escorted them out of the terminal—but it wasn’t until they got outside that all hell truly broke loose.

Once outside, Mohammadi began flailing to break free of the team of officers that detained her. Arteaga reportedly grabbed her by the neck as she kicked an officer in the knee, causing him to hit the pavement. Arteaga also reportedly tried to flee the scene, to no avail.

Eventually, two officers dragged Mohammadi to the sidewalk, while two others tackled Arteaga to the ground. They arrested Mohammadi on charges of disorderly intoxication and resisting an officer without violence, while Arteaga faced charges of disorderly intoxication, battery on a police officer, resisting arrest with violence, and resisting arrest without violence, according to WPLG. The officer who caught the brunt of Mohammadi’s outburst was treated at the hospital for knee and hand injuries.

Mohammadi and Arteaga seemed fairly unbothered by their newfound publicity in a post-arrest interview with WSVN.

“We’re gonna do the best that we can to become better people, and this is only a little minor setback,” said Mohammadi, who had by that point acquired a pair of flip-flops. “People make mistakes. Don’t get too lit before [boarding] an airplane.”