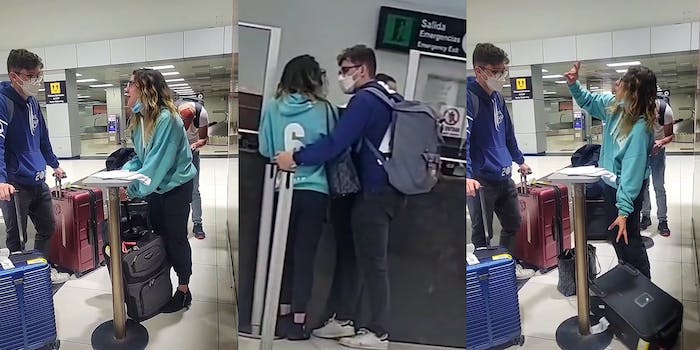 ‘I feel so bad for him’: Drunk Karen berates boyfriend in airport

A viral TikTok shows a woman yelling at her boyfriend while crying in an airport.

Posted by @artlifesoul on Saturday, the TikTok shows a woman berating and screaming at her boyfriend about him not helping her. In the video, she calls him a “sorry son of a bitch,” and says that if she screams loud enough, someone will separate them. She also tells him she hates him.

The video, which is tagged #karensoftiktok, had almost 7 million views on Tuesday.

The TikToker tagged Carlos Viteri (@carlosviteri12) in a follow-up video and identified him as the boyfriend, “Carlos,” shown in the video.

Viteri posted TikToks explaining the context behind @artlifesoul’s viral video. He says that he is no longer with her, and the video shows them getting ready for their (canceled) flight back from Ecuador, where he is from, in January. The TikToker who posted the video said they were on the same flight.

Viteri says that his ex has a history with substance abuse and was belligerently drunk in the airport while the two were going through immigration—and she doesn’t speak Spanish.

He also says that her behavior, including racism, continued after @artlifesoul’s video ended. He said at a hotel, his ex-girlfriend fell and injured her head, and the couple was asked to leave.

Viteri explains that he and his ex had nowhere to go, and he ended up finding them another hotel to go to. He says the two flew back from Ecuador the next day.

Once they returned to College Station, Texas, where Viteri says he goes to school, Viteri says his ex-girlfriend threatened to kill herself if he broke up with her. He eventually did.

In a comment on one of Viteri’s videos, @artlifesoul said they were glad to see that he’s “okay” and safe now.

A woman is seen in many of Viteri’s follow-up videos, and many commenters assumed that she was his new girlfriend. Viteri clarified in a TikTok that the woman shown is his best friend and that he asked her to be present when he explained what happened with his ex-girlfriend because it was emotionally exhausting to talk about.

Commenters on @artlifesoul’s viral videos and all of Viteri’s video expressed sympathy for Viteri, and some speculated that Viteri had been abused by his ex.

“I feel so bad for him,” @angieekay commented.

“The thing is, that’s not just drunk behavior. the things she said to [you] are horribly abusive,” @audreyrachel22 wrote. “I’m sorry you went through that and I’m glad you got away.”

“Men are [domestic violence] survivors too don’t feel bad for saying it out loud! You’re a survivor,” @midge1988 commented. “It’s hard to leave it can take up to 7x b4 you leave for good.”

According to PsychCentral, men experiencing verbal abuse is common.

“Abuse of men in relationships is a bit like a dirty little secret,” the site reports. “People, especially the men who are living with it, don’t talk about it—even if they realize it’s happening.”

Many in the comments on Vitera’s video discussed how difficult it must’ve been for him to relive his experiences with his ex.

The Daily Dot reached out to @artlifesoul and Viteri via TikTok comment.