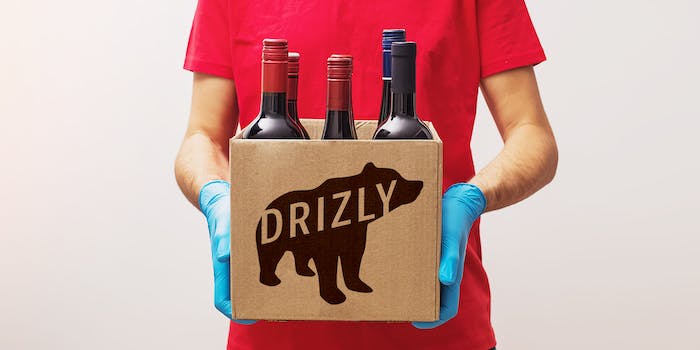 The future of booze: Can this alcohol delivery app keep up the momentum?

As the coronavirus took over, apps like Drizly took off.

This article is the second of four in the Daily Dot’s series on the future of booze and how Americans’ relationship to alcohol is shifting amid the coronavirus pandemic.

Before the novel coronavirus caused sweeping lockdowns and stay-at-home orders across the country, most Americans relied on bars and liquor stores to take care of their alcohol needs. While pre-COVID-19 America had already taken to food-delivery services like Uber Eats and Favor, alcohol-delivery apps such as Drizly and Minibar had not yet integrated into the nation’s day-to-day—or weekend-to-weekend—routines.

But as the coronavirus pandemic began wreaking havoc on the economy, it also boosted the sales and name recognition of alcohol-delivery apps as people confined to their homes searched for the safest way to secure their alcohol fix. At least, that’s the story Drizly’s internal numbers are telling Blaine Grinna, the company’s director of retail development.

“After the explosive growth experienced in the first few months, we have seen a stabilization occur well above what we had projected for this year,” Grinna told the Daily Dot. “Growth remains in the triple digits above our baseline for 2020.”

Grinna said some of the new customers Drizly has picked up during the pandemic could be older patrons.

“Historically, Drizly’s age range has slowly been increasing year over year,” Grinna said. “And the pandemic may have brought visibility to an older generation of consumers who previously didn’t rely on technology for delivery of goods.”

It’s not an exaggeration to say Drizly’s business model depends entirely on local liquor stores. When app users make a purchase, the partner store closest in proximity gets a ping, and it’s up to the store’s employees to handle the delivery.

Vidit Paul, the general manager of ABC Liquor stores in Austin, Texas, told the Daily Dot that two of his three locations partnered with Drizly about two years ago. Drizly stresses its close partnerships with local liquor stores, and Paul said that for the most part, the company walks the walk.

“I have an account manager, I know who I’m speaking to, and it’s always one person,” Paul said. “For smaller issues we just call the support number. But when it is a larger issue, we obviously get a person which is very helpful. I can’t image how Uber and all those large companies can possibly resolve all their issues.”

However, Paul said a partnership with Drizly isn’t always profitable. Paul said for labels like Crown and Tito’s, he has to lower prices to compete on the app with other stores. While lowering the prices for big brands isn’t ideal, Paul said working with Drizly is advantageous in other ways, such as advertising.

Grinna said the number of stores Drizly has partnered with has grown rapidly since the onset of COVID-19.

“Our store count has increased by 53% since early March to approximately 3,200 across the U.S. and Canada,” Grinna said. “More retailers are recognizing ecommerce as a critical diversification strategy and Drizly as the partner that is committed to them.”

According to Paul, the continued growth of Drizly—galvanized by the pandemic—has made it more costly for small liquor stores to partner with the app because of rising fees and the need to competitively price items. He said the rising cost of Drizly’s services made ABC Liquor take steps toward developing its own delivery app.

For now, Paul plans to stay with Drizly even after the launch of his store’s own apps.

When a store such as ABC Liquor sends one of its employees to deliver for Drizly, there’s a strict ID-checking protocol in place. When a customer orders for the first time, their ID is scanned, and their birthday is recorded in the system to verify that the purchaser is of legal drinking age. For every subsequent purchase by that individual, their ID is scanned again.

This policy is designed to deter the notion that an alcohol delivery app could make it easier for minors to obtain alcohol, a crucial public relations hurdle the company must always clear—especially as it gains name recognition. Helen Witty, the national president of Mothers Against Drunk Driving (MADD), said making sure companies like Drizly don’t commodify minors’ access to alcohol is a top priority.

“As for the sale of alcohol, we take no position,” Witty said. “What our concern here would be is for safety. For anyone who delivers alcohol to a home, we would want to make sure—No. 1—that it’s sold to someone who is 21 or older.”

Monotech, a company that makes breathalyzers for vehicles—designed specifically to prevent drunk driving—released a statement saying Drizly may help keep drunk drivers off the roads. However, Witty said MADD wouldn’t comment whether it supported or disapproved of alcohol delivery services because of its policy not to take a position on alcohol sales.

“That’s something we have to be very careful about,” Witty said. “Because we deal with families who are facing a sudden violent death.”

On Drizly’s part, Grinna said the company has a platform for responsible drinking that includes resources for those struggling with addiction. At the bottom of the platform is a link to contact Drizly about disabling the account of someone who may be abusing the app.

Nailing the company’s message on alcohol abuse, the dark side of its product, is only going to become more important for Drizly as the company’s profile rises. And make no mistake: It’s rising. In Austin alone, Grinna said Drizly has experienced a 348% increase in the sales they expected to see over the past four months.

“Ecommerce alcohol was already a growing category,” Grinna said. “Due to the pandemic, we’ve seen that growth accelerate and we expect that to continue … over the last few months, we’ve moved to meet this moment.”