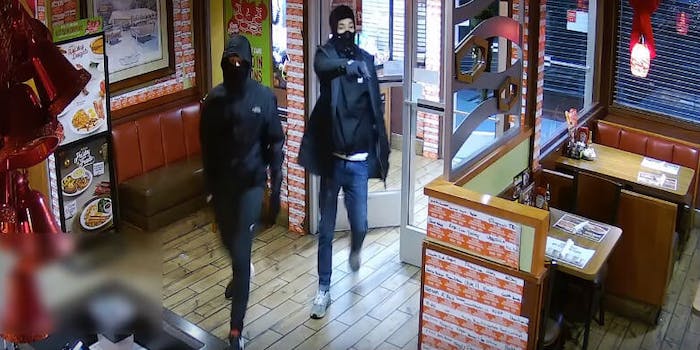 Yusuf Ozgur accidentally walked into an armed robbery. The two suspects are still at large.

A DoorDash driver was shot and killed by two robbers inside of a Denny’s on Christmas morning. Virginia police are now searching for the two men, who are still at large.

According to Complex, at around 2:30am on Christmas morning, the robbers entered a Denny’s brandishing a gun and a baton, demanding patrons hand over their valuables and employees empty the cash registers. As they fled the restaurant, 56-year-old Yusuf Ozgur was on his way in to pick up a DoorDash delivery. During their encounter, one of the men hit Ozgur with his baton and the other shot him. Ozgur was rushed to a local hospital where he was pronounced dead. The two men also shot and wounded another man after he refused to hand over his personal possessions, but he is expected to recover.

“We are deeply saddened by the loss of Yusuf Ozgur, a Manassas-area Dasher,” DoorDash wrote in a statement to the Associated Press. “Our thoughts are with his family, friends and loved ones, and we are reaching out to his family to offer our full support during this difficult time.”

The tragedy prompted an outpouring of support online. A GoFundMe page set up on behalf of Ozgur’s wife has raised more than $125,000, surpassing its initial goal of $100,000. The funds will go toward his medical and funeral expenses. Ozgur left behind a wife and two young children, according to the page. Any leftover donations will be going to them.

The Prince William Police Department released descriptions of the men and is urging the public to come forward with any additional information.

The robbers were described as two Black males in their late teens to early 20s. They are between 5 feet 10 and 6 feet tall and are approximately 180 pounds. They were both last seen wearing all black or dark-colored clothing.

*UPDATE: #PWCPD detectives have released additional information regarding the early morning robbery at the Denny's on Sudley Rd in #Manassas that resulted in the shooting death of a 56-year-old man and critically wounded an 34-year-old man. More info; https://t.co/n8TA1JJjSo https://t.co/OGJgTzjvx4 pic.twitter.com/EIhsF66v9i

“Anyone with information regarding this incident is asked to contact the Prince William County Police Department tipline at 703.792.7000 or submit a webtip to: www.pwcgov.org/policetip,” the police department’s Facebook page urged.