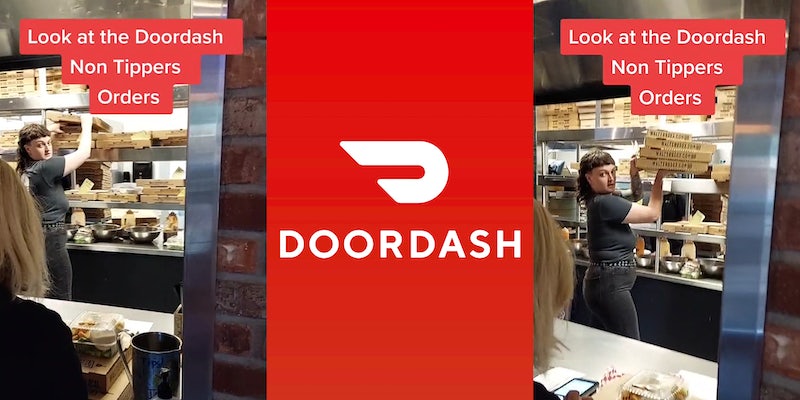 'Me, a non tipper, who still gets his food on time, and hot and accurate, and unbothered.'

Tips for DoorDash drivers remains a charged topic on TikTok, with delivery drivers constantly having to remind customers about its importance.

A recent video by user @doordashtips2 shows a large pile of boxed pizzas that allegedly belong to customers who chose not to tip in the DoorDash app, sparking a debate among DoorDash customers and drivers who viewed the video.

The text overlay reads, “Look at the Doordash Non Tippers Orders,” and the video uses the popular “Hide the money ya’ll; there’s poor people around” sound. All the orders in the video implies that if a customer doesn’t tip, their order likely won’t get picked up by a DoorDash driver.

Many viewers who have experience driving for DoorDash or other food delivery services agreed with not picking up orders with low tips. “If it’s under 10$ I’m not taking it,” one user said.

However, the majority seemed to disagree and let @doordashtips2 know so in the comments. Some users on the platform don’t see food delivery services as work that merits a tip, with one person saying, “I wish I could tip the people making my food and not the people who go from point A to post B in a car and call it hard work.” The creator of the video responded by simply saying, “No tip no food.”

Others simply gloated about the fact that they don’t tip at all but still receive their food on time. “I have never tipped and never will,” said one user. “Me, a non tipper, who still gets his food on time, and hot and accurate, and unbothered,” said another.

Tipping is a standard in the food service industry, and delivery drivers are considered a part of that economy. CNN Money states that food delivery can even be a hazardous job if delivering in dangerous neighborhoods or in bad weather. The website suggests tipping at least 10-20% and to never assume that delivery charges, if there are any, go to the driver. But many users feel that delivery drivers are entitled and that it’s a no-win situation. “Even if you do tip some drivers will still be mad because they feel they should’ve been tipped more,” one person said.

Some viewers who were on the receiving end of food deliveries pointed out that while they’re happy to tip their drivers, it’s a gamble to tip before a service is complete. “Why would you tip before you get the food. You don’t know what’s gonna happen with the order,” one user asked. Another also argued that tips should be earned, saying, “Tips should not show up until after the delivery.” He also made the point that he doesn’t “get tipped until after I have given good service.”

However, not everyone felt that drivers were asking for too much. Many said that they tip their DoorDash delivery drivers regardless of the situation. One said, “I always tip fairly big and more if it’s over a couple of km’s. Never missing items always promptly delivered.” Another user wondered, “why it’s so hard for people to just tip… I always have them leave by my door and add extra if they don’t ring or knock.”

Update 2:21pm CT, Sept. 29: @doordashtips2 told the Daily Dot, when reached for comment, that “We as delivery drivers only accept good tippers orders.”