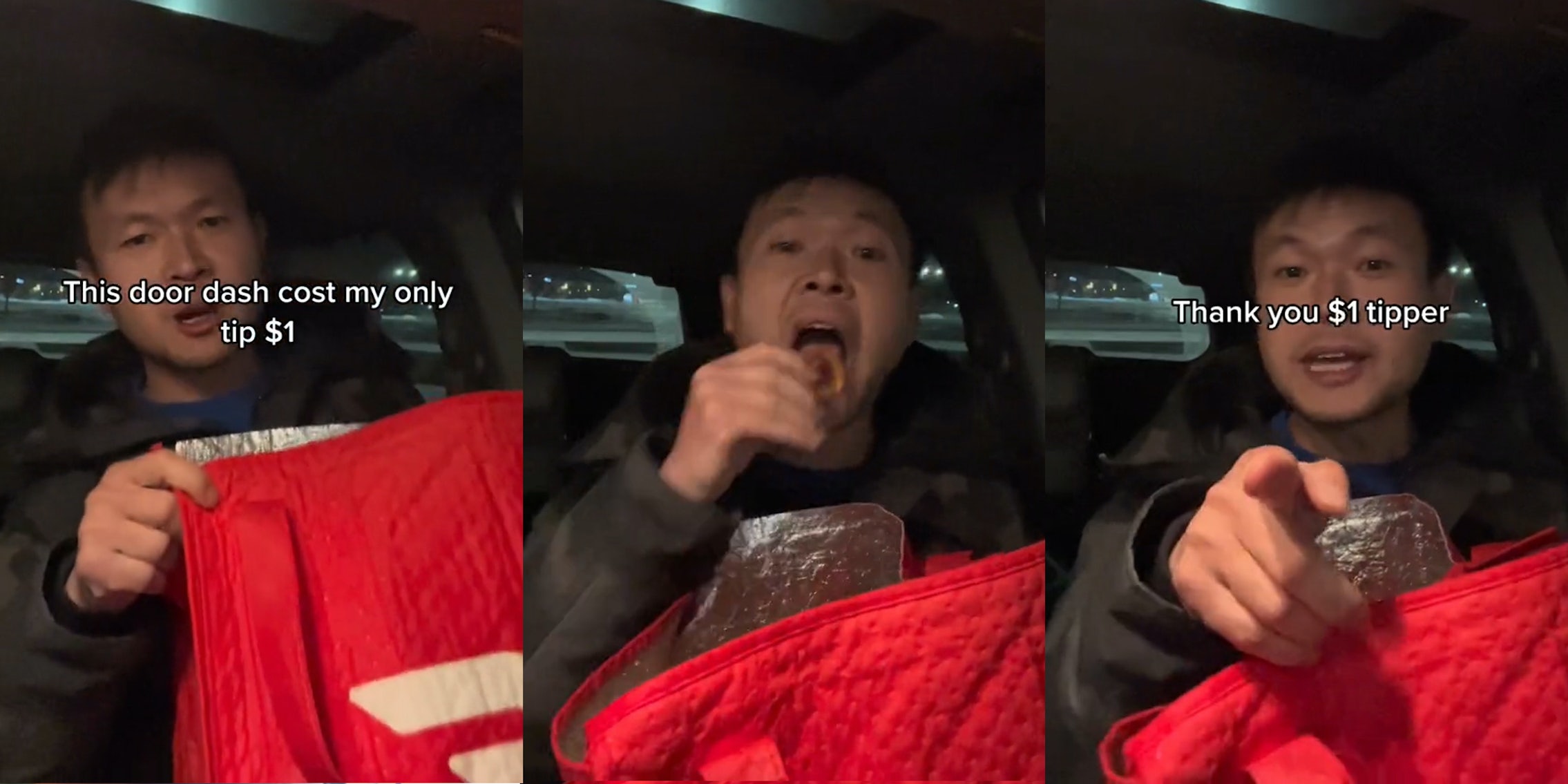 'Don't you choose the orders you take?'

In a viral TikTok video, a DoorDash driver eats a customer’s Arby’s order—because they tipped just $1.

There are plenty of DoorDash drivers who are quick to call out poor tippers on social media, and the consequences that come with being miserly with gratuity. In some instances, deliveries that don’t have tips associated with them simply aren’t picked up, as drivers believe their time could be better spent competing orders for customers who are promising higher payouts. And then there are drivers who complete deliveries for patrons who don’t tip, but find subtle ways at getting back at them, like dropping their food to the ground, instead of gently placing it there.

However, in the clip from user @doordashtips2, the TikTok creator and DoorDash driver goes about “repaying” customers who don’t give him a tip another way: he eats their food.

In the video, the TikToker opens a red foil bag containing the order as he speaks to the camera.

“DoorDash customer only tipped one dollar, hmm let’s see what he got at Arby’s huh?” @doordashtips2 says. “Beef and cheddar, he’s got the french dip, and the crinkle fries. Oh man, that’s my favorite.”

He then grabs what looks like a french fry from the bag and begins eating it. “Thank you $1 tipper! Peace!” he concludes, pointing to the camera.

The Daily Dot has reached out to @doordashtips2 and DoorDash via email for further comment.

According to WGN Chicago, 80% of surveyed DoorDash delivery drivers admitted to snacking on some of the food that customers have purchased through the application. But there were other confessions made by couriers in the survey. 23% of drivers have admitted to “deliberately” damaging the packages/items they were hired to deliver, while 9% said they urinated on or near a customer’s house. Lastly, 17% outright admitted to stealing packages intended for someone else.

@doordashtip2 isn’t the only delivery driver who has expressed concern over being underpaid on social media, and legislation is underway in certain parts of the country to ensure that delivery drivers are receiving a guaranteed payout for their services. The state of New York is currently working on a law that would see employees for food delivery services earn a minimum wage of $23.82/hr by the year 2025. Seattle has also passed an initiative that guarantees food service delivery workers will earn a $17.27/hr minimum wage while they’re on the job.

@doordashtips2’s video still sparked debate among viewers, who discussed the idea of tipping before receiving their meal.

“Tips before getting food is crazy,” one user wrote. The TikToker replied, “No tip no food.”

Another thought that the ire the TikToker was displaying was misplaced.

“Bro don’t you choose the orders you take and see the tip you’re getting before picking it up?” one user asked, noting that DoorDash drivers are able to see the pay and tip they’ll receive before accepting an order.