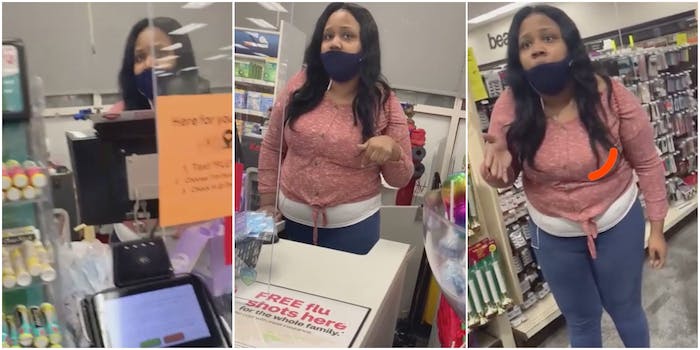 'You stole, and now you are trying to make me get in trouble for it.'

A video trending on the r/PublicFreakout subreddit shows a CVS manager shouting profanities at a Doordash driver who accused her of falsely reporting that her food had not arrived.

The altercation apparently took place at a CVS in Garner, North Carolina. The Doordash driver walks right up the CVS employee and confronts her as she is serving a customer—a police officer, no less.

“I was just wondering why you said that your food never got delivered when I handed it to you?” the driver asks the CVS employee.

The employee says she didn’t report that.

“It definitely does [show that], and that’s fraud, and now I might be charged for it,” the Doordash driver responds.

The CVS employee continues to deny the accusation, and the Doordash worker stays committed to her claims of “fraud” and “stealing,” clearly trying to embarrass her.

Once the CVS employee finishes her transaction with the officer, she focuses all of her attention on the Doordash driver, who says she got a text saying the order was not accepted.

“Why did you even have the nerve to come to my job, talking to me while I was with another customer?” the CVS employee asks.

“Because you have the nerve to report your food as never being received. And then I get in trouble and have to pay for it and lose my job,” she responds.

The CVS employee tells her she should have called Doordash instead of approaching her at her workplace.

“So are you saying you got your food?” the driver asks.

“You need to leave me alone—that’s what I’m saying—before I call the police,” answers the CVS employee.

The Doordash worker asks if there’s a manager. The CVS employee tells her she’s speaking to one as she walks away, seething.

The manager peeks out from an aisle and says, “She better get the fuck away from me.”

“I just want you to admit you got your food so I don’t lose my job,” the driver says. “I deliver food to you, and you sit there and tell my job I never dropped the food off?”

Then she says, “I hope they have cameras.”

Another critical piece of the altercation is the Doordash driver’s responsibilities. According to the company website, the driver should have taken a photo of the delivered food with a description. She also could have taken a picture of the transaction with the CVS employee.

In other words, even though the CVS manager seems guilty, it was the driver’s responsibility to document the delivery of the food to avoid liability.

The driver persists in trying to get the manager to tell the truth about her food: “I just want you to admit that you took your food, and I’ll leave you alone.”

“And I’m waiting for you to get the fuck up out my face,” the CVS employee snaps. “You’re making me act a fool at work, and it’s not even that serious.”

“It is that serious. It’s fraud,” the driver tells her. “You stole, and now you are trying to make me get in trouble for it.”

This back-and-forth between both workers continues for several minutes, ultimately reaching no resolution.

Several social media users slammed CVS for the manager’s behavior and demanded that the company hold her accountable. Others claimed to recognize the location and vowed to air their grievances with the employee.

“This is my local CVS so if I see that manager there in the future, I’ll have to let her know how famous she is online for being an asshat,” wrote u/swagdaddyh69.

One commenter expressed the importance of their Doordash job.

“I got laid off during the pandemic and have been out of work since. Doordash has been my only savior,” u/HelpfulManufacturer0 wrote. “Tuesday I received an email from Doordash saying my account is deactivated due to a customer reporting my food never delivered, I have delivered all my food, and take a picture at every address like it requires. I just got an email saying my appeal was denied. So I literally just got fired from Doordash because of lying customers saying they didn’t get food.

“GrubHub and UberEats aren’t in my market, that was all I had to make a little of extra cash while I find work,” they continued. “But dishonest people like this woman made me lose my job just for a free meal. I have no idea what I’m going to do now.”

A CVS spokesperson told the Daily Dot the company is “currently investigating this incident and trying to contact the food delivery person directly to address this matter.”

A Doordash representative told the Daily Dot it was the first they had heard of the incident and they would also investigate it, adding, “We take the safety of our community extremely seriously, and such disrespectful behavior is never tolerated on the DoorDash platform. Any behavior that violates this zero tolerance policy is grounds for deactivation, and we sincerely regret that this incident fell short of the experience we strive to give our customers every day.”

Update 12pm CT, Dec. 11: This story has been updated with responses from Doordash and CVS representatives.