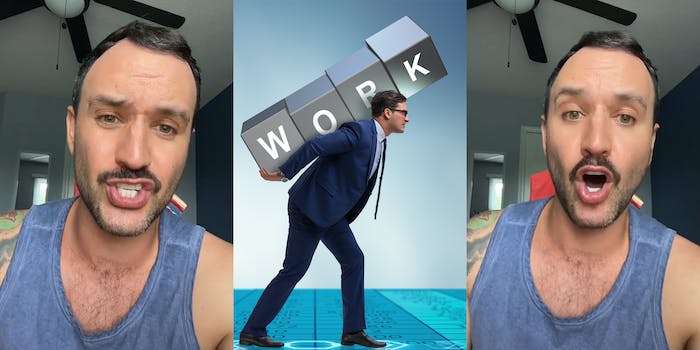 ‘Why you working so hard? The world is ending’: TikToker urges viewers to ‘take a load off’ at their jobs, sparking debate about work-life balance

'The only reason your office should have politics is if your office is inside a congressional building.'

A TikToker who goes by Andr3w (@andr3wsky) on the popular social media platform went viral for a clip urging folks not to work so hard as “the world is ending.” His comments sparked a debate in the comments section as they do touch upon a litany of socio-economic issues that have left many Americans feeling overworked to the point of hopelessness as they have nothing to show as a result of their labor.

Why you working so hard? The world is ending

“I’m gonna be honest with you,” he starts in the clip. “A lot of you out there taking your jobs way too seriously. OK, society is crumbling all around us. Take a load off. Enjoy it. I can’t believe some of you are out there playing office politics during the apocalypse.”

“The only reason your office should have politics is if your office is inside a congressional building. Just go to work and work there. I can’t believe this isn’t obvious to everyone. It’s in the name, it’s why they call it work,” he continues.

The creator then assures viewers no job is worth “stabbing your [co-workers] in the back for.”

“You’re not Cersei Lannister,” he jokes. “T-Mobile store 5962 is not Kings Landing. You can’t be out here writing a schedule thinking to yourself chaos is a ladder, you know?”

There’s no shortage of think/opinion pieces on the importance, or lack thereof, of office politics. Harvard Business Review argues that they are a part of every organization and that they simply cannot be ignored: “Despite all the negative connotations, office politics are not inherently evil. They are about two things: influence and relationships, and the power these two things give you — or don’t,” Niven Postma writes.

Jo Miller for The Muse also believes that there are healthy ways to engage in office politics that will not only help further one’s career but could ultimately be more conducive for an organization as a whole: “But if you tend to ignore office politics, consider the consequences…Ignoring these situations might help get you through a tough workday without confrontation, but can set you back in your long-term career goals, Jo writes.

In the comments section of Andr3w’s viral TikTok, many users expressed their own frustration in dealing with office politics. Some shared the ways that they extricate themselves from these situations entirely, while others said that they think it’s absurd to go to work and toil at a nine-to-five when they honestly feel like we are heading towards a grand societal collapse.

“Work is never worth your peace & always be wary when they say ‘we’re a family here,'” one user wrote.

“I’ve started convincing my coworkers that I’m a felon. There’s literally no reason to not believe me,” another joked.

“But like on a serious note. How do we focus on mundane things like going to work when it really does feel like the world is ending,” one user questioned.

“My boss told me to work toward a promotion. I told him the world is falling apart. A promotion isn’t a priority while I’m losing rights,” a user shared.

But some people said that they were appreciative of the companies that they worked in and the managers who oversee daily operations.

“This is why I’ll never leave my company. My boss frequently says things like ‘idk the point in meetings’ or ”oh cool it’s easy, let’s leave early paid,'” a viewer commented.

In terms of the “apocalypse” that the TikToker is referring to, it’s no secret that the United States is in a dire economic situation. Global gas price surges are threatening economies worldwide, and in the United States, inflation is at a 40-year high. America’s housing crisis is making it almost impossible for many citizens to own their own homes, and even renting for families working multiple jobs is becoming an increasingly difficult prospect to manage.

20 Something Finance writes that on average, from citizen to citizen, the U.S. “is the most overworked nation in the world.”