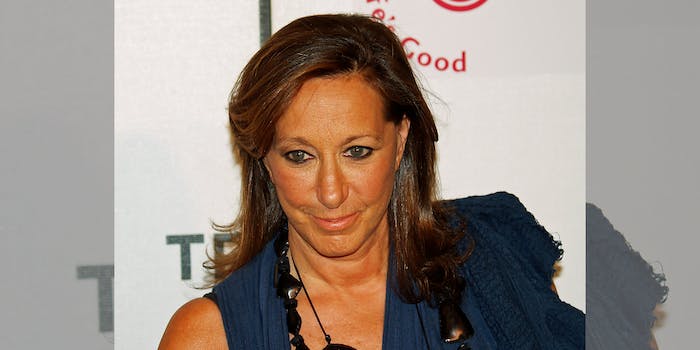 A fashion designer victim-blaming women for their clothing choices could not be more ironic.

DKNY founder Donna Karan is backtracking after commenting on Harvey Weinstein‘s accusers, saying they could have been dressed in a way that meant they were “asking for it.”

Her comments, published by the Daily Mail, and made while on the red carpet at the CinéFashion Film Awards, appeared to condone the actions of Harvey Weinstein, the film executive recently exposed by the New York Times of having a 30-year history of sexually harassing women in the industry.

Before the awards show, where Karan received the Designer Icon Award, she reportedly told a reporter that while women are often poorly treated across the world, women in developed countries must ask themselves about what they could be doing, or how they could be dressing, to invite harassment. She also said Weinstein and his wife Georgina Chapman are “wonderful” people, that Weinstein had done some “amazing” things, and that he isn’t the only Hollywood offender to be “busted.”

“To see it here in our own country is very difficult, but I also think how do we display ourselves? How do we present ourselves as women? What are we asking? Are we asking for it by presenting all the sensuality and all the sexuality?” Karan said. “And what are we throwing out to our children today about how to dance and how to perform and what to wear? How much should they show?”

“You look at everything all over the world today and how women are dressing and what they are asking by just presenting themselves the way they do. What are they asking for? Trouble,” she continued.

Across Twitter, celebrities and critics dragged Karan for blaming women for their own harassment—as it’s the kind of comments that often shames and silences women from coming forward with allegations in the first place.

Totally disgraceful by #DonnaKaran. It's a shame you aren't using your voice to be an advocate instead of a victim blamer. #Weinstein https://t.co/6JK6HTEaCz

No more Donna Karan for me https://t.co/QsflmGq7hz

Donna Karan you are a DEPLORABLE Aiding and abetting is a moral crime. You are scum in a fancy dress pic.twitter.com/Vze7lnpdvj

Others pointed to the clothing line with Karan’s namesake to showcase the ridiculousness of her own claims—because no length of pants warrant being violated. Truly, a fashion designer victim-blaming women for clothing choice could not be more ironic.

Hey, does this DKNY top say "please jack off into a pot plant in front of me?" Asking for Donna Karan https://t.co/xejRLFFRWG

Hey Donna Karan…. Here's a new slogan for your new DKNY collection: "Are We Asking for It?" pic.twitter.com/xDy1tafkua

Hours later, Karan apologized for her comments but said they were “taken out of context.” In a statement, Karan wrote that she believes sexual harassment is not acceptable, and apologized for offending others, particularly harassment survivors.

“…While answering a question on the red carpet I made a statement that unfortunately is not representative of how I feel or what I believe…My statements were taken out of context and do not represent how I feel about the current situation concerning Harvey Weinstein,” Karan wrote.

“I believe that sexual harassment is NOT acceptable and this is an issue that MUST be addressed once and for all regardless of the individual,” Karan continued. “I am truly sorry to anyone that I offended and everyone that has ever been a victim.”