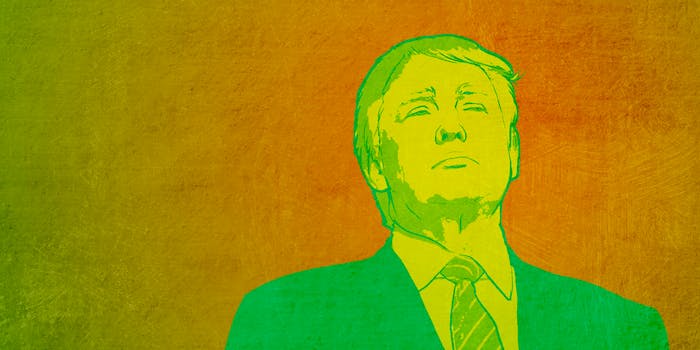 'It felt like I was crossing the border, actually.'

Donald Trump has risen to become the Republican presidential frontrunner by taking the path less traveled, but on Friday he literally had to do just that.

To avoid protesters outside the Hyatt Regency hotel near San Francisco’s airport, Trump and his entourage of Secret Service agents and handlers chose to enter the building through a rear entrance, which required the New York billionaire real-estate mogul to hop over a barrier and run up a small dirt embankment.

WATCH: Trump forced to jump over barrier & up small dirt hill to get in rear door of event due to protests. https://t.co/01LGnBdcGA

Trump is in San Francisco for the California Republican convention, where he was scheduled to speak at 12pm PT. His speech was delayed, however, after protesters broke through a police barricade and attempted to storm the hotel.

Protesters just broke thru the barriers are russhing hotel. pic.twitter.com/ta7pMUOxvy

Protesters pushed through barriers and have been facing off with police #CAGOPConvention pic.twitter.com/kii3EJUaUL

Protesters break through barricades again and surge toward hotel at #CAGOPConvention pic.twitter.com/irkVDf8Mxb

Protesters on second level bridge leading from a parking garage to Hyatt pic.twitter.com/JWJtRT2M2U

And then this happens. Protesters break through the barricade, rush for the entrance and clash with police. #CAGOP pic.twitter.com/sMftB887Hk

The Guardian reported that roughly 500 protesters had gathered outside the Hyatt. Some threw eggs at the police, and one window was broken. The protesters were reportedly mostly young, and some appeared to be of Mexican descent. They were chanting anti-Trump slogans in English and Spanish.

Protesters continued to clash with police as the afternoon wore on, with one arrest caught on video after yet another confrontation with officers.

At least one person was just detained at side of #CAGOP Convention as police push forward into crowd pic.twitter.com/oJxeNKeJeb

Friday’s unrest followed protests outside a Trump rally in Costa Mesa, California, on Thursday that resulted in a smashed police cruiser, violence from both protesters and Trump supporters, and 20 arrests.

Trump eventually took the stage just before 1pm PT and address his peculiar entrance during his speech.