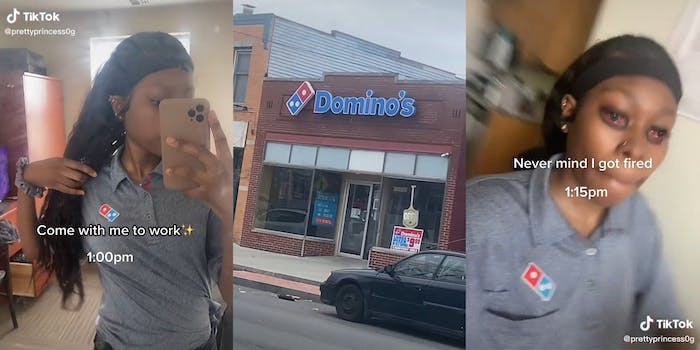 'Never mind I got fired.'

A TikToker’s video initially showing what her workday looks like was derailed when she was allegedly fired 15 minutes after arriving for her shift at Domino’s.

In the video, TikToker @prettyprincess0g shows herself ready for work and leaving for her shift at 1pm. She then uses the crying eyes filter, and the text overlay on the video reads: “Never mind I got fired.”

@prettyprincess0g informed her viewers via the comments section that she was fired for not showing up to work on multiple occasions, not for trying to film her workday. She wrote that she did not even have the opportunity to clock in when she showed up.

“I don’t be showing up and I thought I could get away with it,” she wrote.

“LMfAOOO this is embarrassing,” she added in the caption.

The video was posted on Thursday and garnered 51,000 views on the platform.

“LMAOOO WHAT,” one said.

One commenter said they were also fired by Domino’s but that management waited until the end of their shift to cut ties.

“LMAOO at least they didn’t wait until the end of the shift like they did to me,” they said.

The Daily Dot has reached out to @prettyprincess0g via TikTok comment and to Domino’s via email.