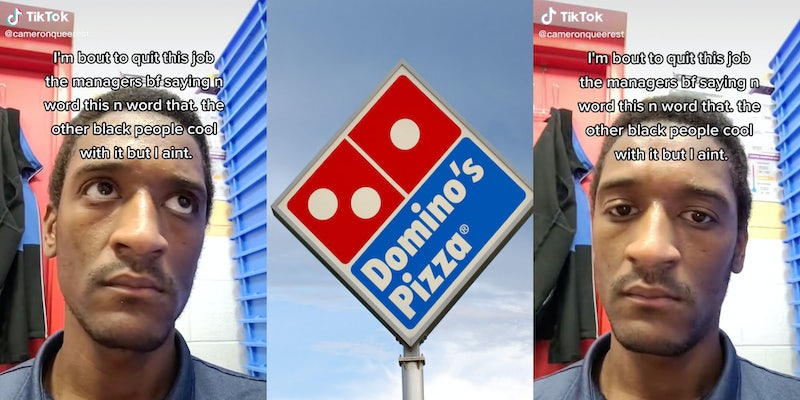 'This is so wrong and sad.'

A Dominos’ Pizza employee says that their manager’s white boyfriend, who works at the restaurant, uses the N-word.

User @cameronqueerest posted a TikTok on July 4 about their manager’s boyfriend, who is white, using the N-word in front of them and their fellow Domino’s employees. The TikToker says that it makes them want to quit their job.

“The other Black people cool with it but I ain’t,” @cameronqueerest wrote in their TikTok’s overlay text. The video shows the user wearing a Domino’s uniform and shaking their head.

In the video’s caption, @cameronqueerest says that they’re “pissed off” at work.

“I can’t stand this shit,” the TikToker wrote in the video’s caption. “Like what is wrong with yt folx [white folks].”

I’m literally just trying to save money cause I’m about to have my own car. now I’m pissed af at work I can’t stand this shit. like what is wrong with yt folx

@cameronqueerest also posted a TikTok that includes a recording of their manager’s boyfriend joking about Domino’s employees having sex with customers for money. The TikToker’s manager is heard telling her boyfriend that he is acting inappropriately.

“Anybody listening in on your conversation could charge you with sexual assault,” @cameronqueerest’s manager is heard saying.

@cameronqueerest turned comments off on their viral video. Comments on their second TikTok about the situation included advice on steps that the TikToker should take next.

“Im so sorry you have to deal with this. Keep recording,” @ms.solar.rainbow commented. “You definitely have a hostile work environment please stay safe.”

“EEOC [Equal Employment Opportunity Commission] here I come! If that don’t SCREAM ‘hostile work environment’ nothing else does,” @lindam016 wrote.

“Write a complaint. Get paid if he doesn’t fix it since u got proof,” @bk.bri commented.

On its website, the Equal Employment Opportunity Commission explains that employers are liable for harassment if a “supervisor’s harassment results in a hostile work environment” if they aren’t able to prove that they tried to “correct the harassing behavior.”

Other commenters sympathized with @cameronqueerest.

“This is so wrong and sad,” @divinewords commented.

The Daily Dot reached out to @cameronqueerest via TikTok comment and to Domino’s through email.