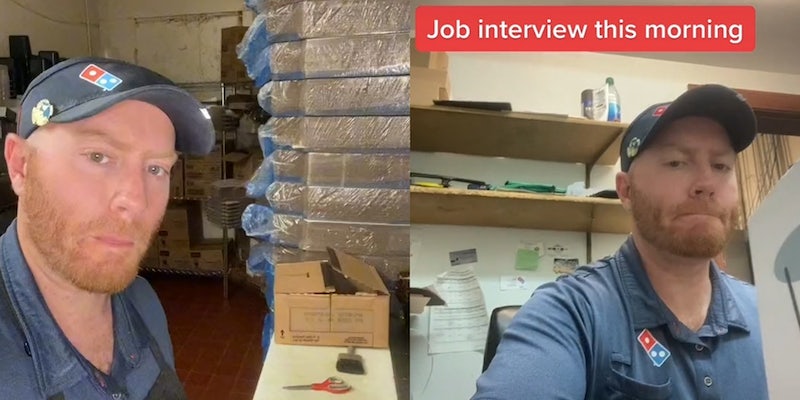 'This is the most interesting interview I've had in a while.'

A Domino’s Pizza manager in Kennewick, Washington, sparked a debate on TikTok after he posted snippets of a job interview and explained why the candidate had two “strikes.”

The manager Miguel Saucey (@miguelsaucey) says he informed the candidate that he would be recording himself during the interview for “training purposes” and to make the TikTok video. He did not record the candidate or his responses.

In the video, Saucey shows several clips of himself asking the candidate typical food service job interview questions. He tells the candidate he’s looking for an employee who can be available for night and weekend shifts, but in return, he gives employees whatever time off they want.

“If you had to rank yourself on a scale of one to 10, with 10 being the highest and one being the lowest, on the frequency of which I can expect you to call out, what would be the number that you give yourself?” the manager asks in the video.

Saucey says he wasn’t convinced by the candidate’s response to that question. He says the candidate gave himself a three, equaling 30% out of 10. Saucey says that’s an issue that would need to be addressed because he doesn’t like his employees calling out on him when he already gives them the time off they ask for.

Overall though, the candidate answered the questions “very, very well,” Saucey says. The candidate seemed like he really wanted and needed the job and wanted to get to work immediately, he adds.

“He already knew where the interview was, he knew what position he was looking for, he just didn’t walk into the building,” Saucey says in the video.

At the end of the video, he asks viewers to tell him whether they would hire the candidate despite the “strikes” he just explained.

Most viewers said yes, they would.

“Yes, hire him. Do you know how many people would’ve lied and said no chance of calling out just to get the job?” one viewer commented.

“Ide hire him for that job, keep a eye on him. Lead him to success,” another viewer said. In reply to that comment, Saucey wrote, “That’s a fair point. Could just need some direction.”

Some viewers weren’t as sure.

“I’d ask him to explain his answers and work from there. if his responses don’t fit with the current team then it’s a no go,” one user said.

Another user said they wouldn’t hire the candidate: “No not with 30% chance of calling out,” one wrote.

But others said they didn’t interpret three out of 10 as an automatic 30% chance of calling out.

“I don’t think 3 means 30% chance of calling out . In my mind a 3 is maybe a call out or two a month,” one viewer wrote. In reply to the comment, Saucey said, “We had a good chat about why he said 3, it was honest and forthright. I respect that, still on the fence a bit though.”

“Please don’t mistake this as an insult, I don’t mean it that way at all, but it’s Domino’s. We’re not interviewing for the Secret Service here,” one user wrote.

“My drivers make around $25-30/hour, so I don’t tolerate minimum wage behavior. The interview is to field those candidates,” Saucey responded.

The Daily Dot reached out to the creator via TikTok comment and to Domino’s via email.