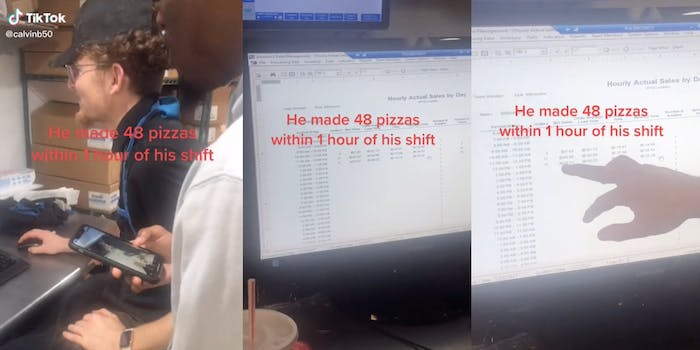 ‘You get paid the same no matter how many you make’: Domino’s employee makes 48 pizzas in 1 hour, sparking debate on TikTok

'Domino's doesn't pay you enough for your hard work bro.'

People on TikTok are telling a Domino’s employee who made 48 pizzas in one hour to “act his wage.”

“He made 48 pizzas within 1 hour of his shift,” the text overlay on the video reads.

In the video posted by @calvinb50, his coworker has the store’s hourly sales history pulled up and points to the dozens of orders he fulfilled.

The viral TikTok has received more than 1.3 million views since Dec. 2.

Omar Anwer, the pizza whiz from the video popped into the comments section to give some additional context.

“I don’t even get paid good this is just a college job for now but ion wanna got to college either i just need another job,” Anwer said.

“U blowing up and u gon tell the world u hate ur job,” @calvinb50 replied jokingly.

While they recognize Anwer’s ethic, people in the comment section said he shouldn’t work so hard if he’s not getting paid well.

“If he is not benefiting from his accomplishment, then he needs to learn the concept of ‘act your wage’,” a commenter said.

“Domino’s doesn’t pay you enough for your hard work bro,” another wrote.

“And you get paid the same no matter how many you make,” a commenter added.

Others pointed out that Anwer made the store hundreds of dollars in that hour while likely getting paid somewhere between minimum wage and $20 an hour.

On the other side were people who said Anwer’s effort will eventually pay off.

“That’s how you get the raise. Have to show your worth just like anything else. He will outgrow that job fast,” a commenter said.

The Daily Dot reached out to @calvinb50 and Anwer via TikTok comment.