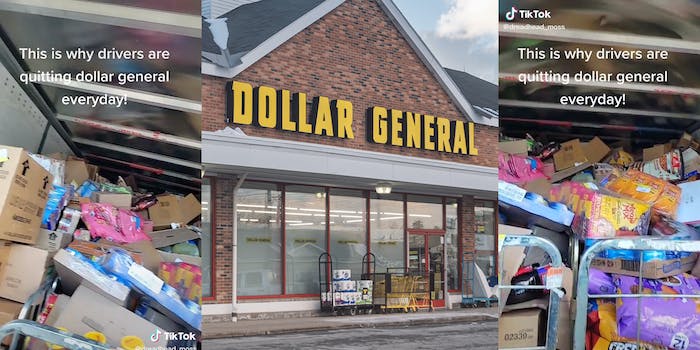 ‘This is why drivers are quitting Dollar General’: Viral TikTok shows truck packed to brim with store items

A TikToker’s viral video shows an alleged Dollar General truck packed to the brim with store merchandise. The TikToker claims this is why the company’s drivers are quitting.

Posted by @dreadhead_moss, the video has garnered 530,000 views and hundreds of comments. Many commenters claim they are former Dollar General workers and lasted a short time at the job.

“I worked at DG for 3 days and left,” one commenter wrote. “The store was just as disorganized, and the staff at that store was sketchy.”

“I WAS an assistant (manager) at DG, when I interviewed for my current job, they apologized to me for having to work there,” another commenter wrote. “DG is absolutely the worst.”

“I’ma just stay I started my job at dollar general and didn’t go back the next day,” a commenter wrote.

Others remarked on the disorganization of inventory in the truck and stores they had worked at.

“I remember having to throw out so much,” one commenter wrote. “They will literally pack food and laundry soap on the same rotainer and all gets destroyed.”

“When I worked at DG No matter how much I cleaned and organized the store, It would be trashed the next day,” a commenter wrote. “Noped out of there.”

“The stores look just like that,” another commenter wrote.

One commenter went as far as to suggest that Dollar General should hire her as an organizer to keep up the inside of its stores.

“I want to work at dollar general as an Organizer,” she wrote. “Nothing else. No register. No cleaning. Just organizing at my own pace.”

The Daily Dot has reached out to @dreadhead_moss via Instagram direct message and Dollar General via email.