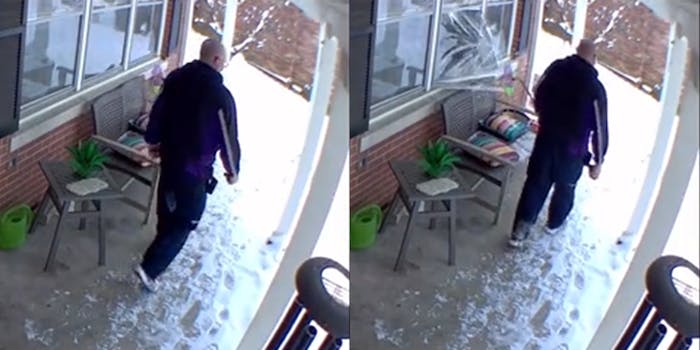 'It's really not funny or cute at all.'

A video of a dog breaking through a window while barking at a FedEx driver sparked debate about whether this is acceptable pet behavior on TikTok.

“This poor FedEx man will never want to make another delivery to our house,” Britney Harper(@britneyharper859) captioned the video.

The clip has garnered 1.3 million views on the platform since Jan. 7.

In the video, a FedEx employee places a small parcel on the stoop of a home, passing by the window as he leaves. As the dog begins barking, one of the windows at the front of the house shatters just as the driver passes in front of it. The home security camera footage also shows him beginning to slip on an unshoveled driveway, piled up with snow.

Many commenters criticized the pet owner for seemingly making light of the situation.

“I’ve been in that situation when I carries mail,” one commenter wrote. “I’ve also been bit twice. It’s really not funny or cute at all.”

Some shamed her for her dog’s behavior toward the worker.

“As a dog owner, I am embarrassed that dog isn’t trained better than that!” the commenter wrote. “They should have a no delivery list for houses like this.”

Some piled on the criticism by pointing to the unshoveled driveway. “I wouldn’t have even gone up the driveway with the snow and ice not cleared,” one commenter wrote.

Harper replied to one commenter who asked if the dog was OK, letting them know he cut his leg during the incident.

On the other hand, some commenters defended the pet owner, noting that this may have been a one-time accident.

“But do people realize accidents happen?” the commenter wrote. “He could have easily got over excited and his paw hit the window in just the right way for it to break. Like, the dog didn’t jump through the window, so it looks like he just got over excited. These comments are disgusting honestly.”

In a follow-up video, Harper says that the delivery driver, Tim, and his manager notified her about what happened and that she was very surprised to see that her dog had done that.

“He’s not aggressive, he’s just—if we’re not home, he feels like he’s doing the right thing by protecting our house,” she says.

She also says her windows are “old and thin,” mostly single pane, and that she was not surprised her dog was able to shatter one because he is “a strong dog.”

The Daily Dot reached out to Harper through both TikTok direct message a comment on the video as well as to FedEx directly.