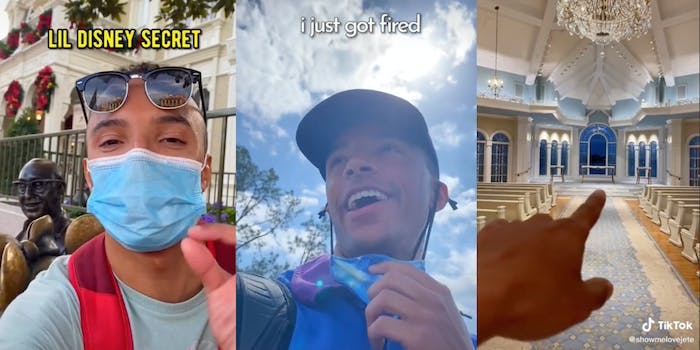 Disney World employee says he was fired over his TikTok videos

The TikToker often posts stories and secrets about the theme park.

A Disney World cast member says he was fired over TikTok videos he posted from inside the park.

Jason Jeter, who goes by Jete and @showmelovejete online, has over 634,000 TikTok followers and often posts stories and secrets about the theme park. One of his most popular videos shows him walking into Disney’s wedding pavilion.

“Look at this, it’s wide open,” says Jeter. “Why would you leave this wide open Disney?”

Some Disney World venues are open to the public, according to the Disney Weddings website. As noted by Insider, the wedding pavilion is occasionally open to guests accompanied by park employees.

Another one of his videos features him “sampling” the water from fountains across Disney Springs, the shopping center at Walt Disney World. In it, Jeter rates tap water from the center’s restaurants. He also is seen drinking water from decorative fountains and spitting it back out in disgust.

“Disney Springs needs to up their water fountain game,” he writes in the caption.

After uploading these two videos, Jeter posted another TikTok revealing that he was fired. He says his manager told him the Walt Disney Company “did not appreciate” his posts and that he had to be let go.

The Walt Disney Company’s standards of business conduct state: “If you comment online regarding any aspect of Company business, identify yourself as an employee and make it clear that the views posted are your own and not those of our Company.”

“I wish Disney would’ve just asked me to delete the videos instead of firing me, but it is what it is,” Jeter says in the video.

Jeter was previously let go from Disney World in the spring of 2020 when the park canceled the Disney College Program due to the coronavirus. In another video following his most recent firing, he calls the termination possibly “the best thing that has ever happened” to him. He says that after the mishap, he was offered sponsorships and job opportunities as a result of his viral videos. Additionally, he says that getting fired helped him achieve one of his goals for 2021—to get recognized by Disney. It may not have been the ideal kind of recognition, but it counts!

The Daily Dot reached out to Jeter and representatives for the Walt Disney Company.