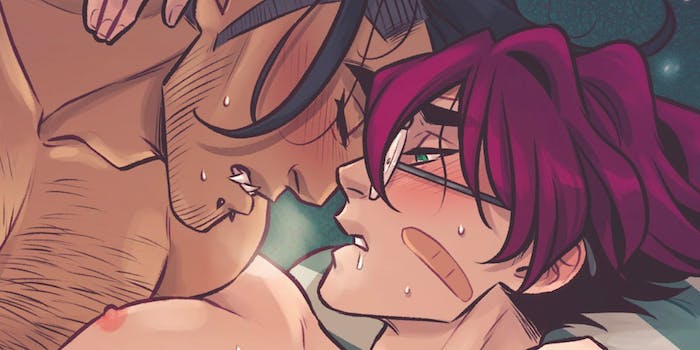 Adult artists say their relationship with Patreon is increasingly strained.

On July 13, boys’ love comics illustrator Lucid tweeted that Patreon “has started handing out warnings if you mention ‘yaoi’ in an image post.” The warning, which Lucid sent to the Daily Dot, states that Patreon “doesn’t allow the featuring of seemingly underage characters in the context of adult content” and encourages users to look at the site’s Community Guidelines before posting.

Lucid calls the flag “insulting” and detrimental to her business, given her website URL is “yaoi.biz.” “Even if I wanted to never be associated with ‘yaoi,’ it is impossible for me since I have a very anime/manga inspired style,” she wrote.

After emailing Patreon, Lucid tweeted that the site “basically [brushed her] off” and told her to “disregard” the “underage warning for using ‘yaoi’ in a post.” She then asked the site to apply the warning “to all 18+ posts or none at all,” and implied in a tweet she may seek out legal representation for the site’s “discriminatory bullshit” if it does not comply.

“Does anyone know a yaoi lawyer,” Lucid tweeted, “asking… for a friend.”

Lucid told the Daily Dot she isn’t sure if she would have “real claim to legal action” until she speaks to a lawyer, but she said flagging the keyword is racist and homophobic.

“It’s kind of tricky because Patreon doesn’t actually stop you from posting [with ‘yaoi’ in the headline], they just belittle you with passive-aggressive warnings,” she told the Daily Dot. “‘I’d really prefer to not get a lawyer involved since y’know, I’d like to just focus on making the content. But Patreon takes a solid 10k a year of my earnings, and me and other ‘niche’ adult content creators don’t deserve to be treated this way for how much they get to dip into our earnings.”

It’s unclear if Lucid would be able to successfully sue Patreon for discrimination, although she may have ammunition for the claim. In 2018, Patreon began censoring all-ages and teen-friendly LGBTQ creators by flagging material “adult content.”

“This post may be outside of our Community Guidelines regarding pornographic content,” Patreon said, according to his Twitter. “Please take a moment to consult our guidelines and if you have questions about this, reach out to our Trust & Safety team at [email protected]”

Scifijackrabbit criticized the message and argued that it makes little sense to track and flag words used by adult artists who run adults-only Patreons.

Neither Scifijackrabbit nor Patreon immediately responded to the Daily Dot’s requests for comment.

Diesel said she hopes the message from Patreon is just a blanket warning reminding artists to paywall their 18+ posts, although she’s skeptical about her future with Patreon.

“I’ve been looking into branching out my sources of crowdsourced income recently,” she said. “I’m concerned about censoring NSFW content on Patreon, but I’m also concerned about that on literally every website.”

“Adult content creators are the only reason Patreon got off the ground in the first place,” Lucid told the Daily Dot. “Now that they’re getting more ‘mainstream’ content creators they feel like they can crack down on the marginalized creators that helped them get there. It’s infuriating, really.”