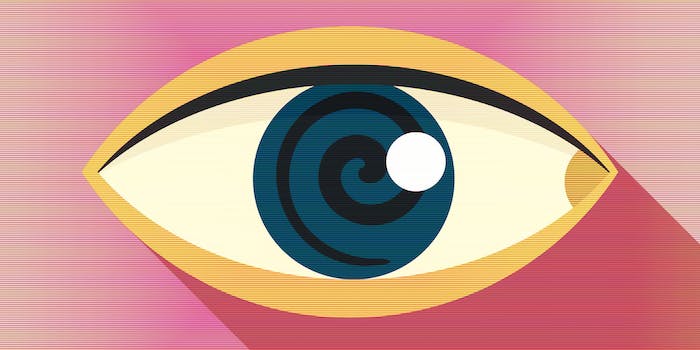 More recently, AVN Stars confirmed hypnosis must be shared behind a paywall, cannot feature a fellow performer, and must be called “mesmerize” or “mind fuck.”

Meanwhile, social media websites increasingly censor and shadowban sex workers regardless of whether they follow the site’s terms of service. The Goddess Clue, an adult performer who specializes in niche kink content, was banned from Instagram three times. She was also forced to close her Tumblr account due to the Tumblr NSFW ban.

“Online censorship is a thorn in every [sex worker’s] side. It can really injure our businesses if we don’t play our cards right,” she told the Daily Dot. “Censorship and banning of words on clip sites are easier to work around though… My advice for fellow hypno kink [sex workers] is to get creative with the way you phrase your descriptions, titles, and keywords.”

“[Fetlife] too [was] facing pressure from [its] credit card processors, and it was an alarming wake-up call to the hypnokink community—we had NO other organized way to connect and create events that would easily reach relevant people,” hypno kink writer sleepingirl told the Daily Dot. “There were some existing websites but nothing that had widespread readership or usage, and although Fetlife ultimately was able to re-allow hypnokink, during that scramble, we never came up with a good alternative.”

“The way that Google works now where it prioritizes popularity and virality, and the transient and dominating nature of social media, makes it nearly impossible to get something off the ground that interested parties would a) find, and b) use,” sleepingirl said.

“When I started my channel I think I was a little naive to just how many platforms would get in the way of creators like myself, making a living doing something we love,” The Secret Subject told the Daily Dot. “In the few years I’ve done this, my partner and I have worked really hard reading and rereading [terms of service] for every new website I try out because things keep getting more strict.”

“Hypnosis isn’t a magical form of mind control where you lose all your will, but it also doesn’t have a component that magically keeps you safe and only doing what you ‘want’ to do,'” sleepingirl said.

She blames censorship on financial institutions that pull the strings behind contemporary ecommerce. Adult industries are generally considered “high risk” services, which means many payment processors elect not to handle sexual material. Services like PayPal and Stripe initially struck deals for handling adult material only to back down or cause issues after the fact, respectively.

“I think largely that it’s about the credit card companies and payment processors who fear chargebacks—if I recall, it was hard to get a proper response from a representative about why they were banning that content, but that was what we ended up learning, eventually,” sleepingirl told the Daily Dot.

The Secret Subject argues pop culture interpretations of hypnosis lead non-kinksters to assume hypnosis works exactly as it does in movies, TV shows, comics, and movies. This works its way up to financial institutions, who ultimately pull the plug.

But regardless, hypno porn’s censorship begs the question: who really controls free speech in the U.S.? If the adult entertainment industry is any sign, then it’s one industry, under MasterCard, indivisible with Visa, Bank of America, and Wells Fargo for all.

“Scams happen sure, but hypnosis is not to blame. Scam artists are going to steal from people regardless of whether there was hypnosis involved or not,” The Secret Subject said. “Please just let people with a passion for hypnosis kink make a living doing what they love.”