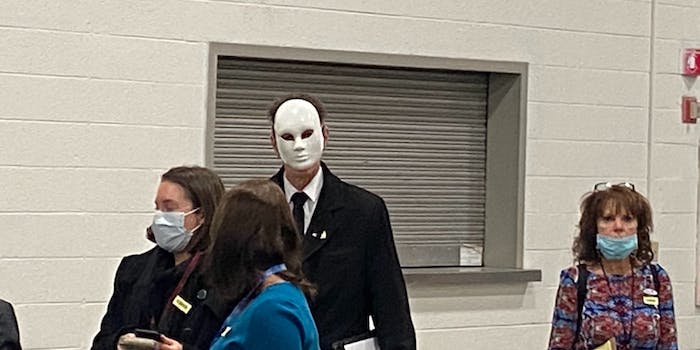 Video: Man in Halloween mask kicked out of polls for making racist comments

Many in the video, including the security workers who escorted him out, are Black.

A poll challenger in Michigan was kicked out of a center that counts ballots on Monday for allegedly spewing racist comments at poll workers.

Journalist Niraj Warikoo posted a series of tweets detailing the incident on Monday, which was the first day the TCF Center in Detroit began processing absentee ballots.

The man is seen in a white Jason from the Friday the 13-style mask.

In a video posted by Warikoo, the man is seen holding his right hand up, his palm open in the air, while speaking to the poll workers, who are trying to escort him out.

In Warikoo’s report on the incident for the Detroit Free Press, a longer video shows what transpired before this moment. The unnamed man is seen harassing others at the center.

As he’s walking past some of the workers, others are seen inching away from him, with one person saying to him, “You’re so tough.”

“I’m not tough, here’s what’s tough,” he says before stammerIng, unable to finish his sentence.

“I don’t know what you’re doing but you’re very bad at it,” the man responds to the poll challenger.

The poll challenger then rants about the video being “on YouTube” and that he wasn’t allowed to bring his phone in.

When security workers approach him, he complies without incident. But as they get closer to the door, he starts yelling with his palm up in the air again.

According to an election supervisor, the man was spewing racist comments and made references to slavery before he was kicked out. Many of those in the video, including the security workers who escorted him out, are Black.