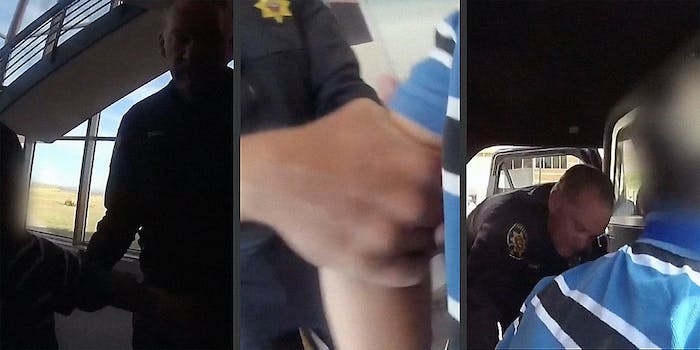 The child's mom is suing the school district and the sheriff's deputies who were involved.

A newly released body camera video from August shows school resource officers roughly handcuffing an 11-year-old boy with autism who poked another child with a pencil.

Sheriff’s deputies reportedly detained the child alone in a patrol car for two hours, where he repeatedly banged his head. He was held on a $25,000 bail and charged with criminal assault, assault on a police officer, harassment, and resisting arrest.

Per KUSA’s report, Douglas County Sheriff’s spokeswoman Lauren Childress said the original call reported that a “student had been stabbed with a pair of scissors and that a staff member had been assaulted.”

(Editor’s note: The following video may be disturbing to some viewers.)

The video clip, also shared by Twitter user @davenewworld_, was made public by the American Civil Liberties Union of Colorado, a co-plaintiff in the suit. The footage shows the boy sitting in a common area as deputies talk to him. Less than a minute later, an officer takes the child’s wrists and starts cuffing him.

“We don’t want to hurt you,” an officer replies. “We just want you to walk with us, OK?”

The boy cries “stop” repeatedly and struggles with the officers.

Later, the boy writhes, and an officer aggressively grabs the boy’s neck, saying, “You’re going to stop. Look at me.”

“You’re choking me,” the boy answers.

An attorney for the 11-year-old and his mother said the altercation was grossly unnecessary.

“[The child] was calming down with a school psychologist when the school resource officers approached him aggressively, and threatening him and handcuffed him,” said ACLU attorney Arielle Herzberg told KUSA.

Herzberg added, “In my view, counselors, psychologists, social workers, and nurses should be called in in situations—especially with children with disabilities. Not cops.”

Others on social media expressed their anger, especially the officers’ and school leaders’ lack of understanding of how to work with an 11-year-old with autism.

“As a father to a son with autism, this video got my blood boiling,” user @Neph_Boqor tweeted. “Panic and stress sends their sensory issues into overdrive and they can’t think straight. Kids on the spectrum only react to calmness. Cops need training in dealing with such issues. This is madness.”