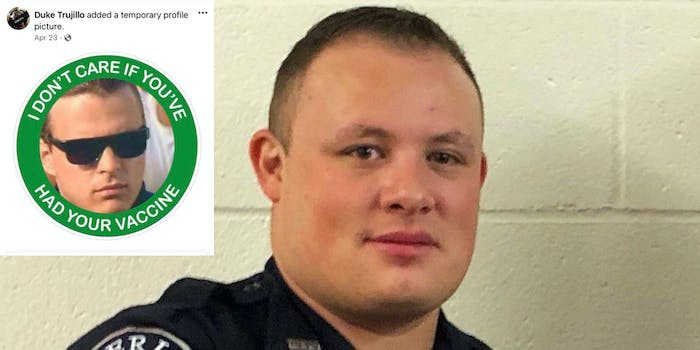 A Denver police officer died on May 26 following complications from COVID-19. In the hours after his passing, social media users uncovered evidence of the officer’s anti-vax history, along with posts voicing distrust of the COVID-19 vaccine.

Sheriff Deputy Daniel Trujillo, who typically went by Duke Trujillo on social media, passed away. The department asked for “thoughts and prayers” for his family following his death.

But many users couldn’t help but point out the sad irony of the situation, assuming that Trujillo may have lived if he’d merely trusted science.

In a Thursday tweet from the Intercept’s Ken Klippenstein, several of Trujillo’s temporary Facebook profile pictures were revealed. One shows a banner surrounding a photo often used by author and journalist Shea Serrano as his avatar with the words “I don’t care if you’ve had your vaccine” plastered on it. The next sees a different banner surrounding a picture of a Boulder Police badge, this time announcing, “I have an immune system.”

Several other posts and bits of Trujillo’s history also came to light following the announcement of his death. In one since-deleted post, Trujillo appears to claim that he’ll consider getting the vaccine “after y’all start growing appendages out of y’all’s foreheads.”

Other posts see Trujillo using the Valknot, an old Norse symbol that has become associated with white supremacy, and asking people if “this mask will stop an uppercut.”

Klippenstein also shared a Denver Post story from 2018 detailing the suspension of both Trujillo and another deputy, Matthew Hammernik. Trujillo was suspended over accusations of excessive force after he beat an inmate’s “outstretched arms with nunchaku” when the inmate refused to remove his arms from a small opening in his cell door. Trujillo also “used the weapon to squeeze the inmate’s arms,” according to the Denver Post.

People were torn between dragging Trujillo and defending the man. People are tired of seeing more death resulting from anti-vaxxers and their refusal to follow public health advice, and they expressed this frustration in a series of harsh, but not entirely inaccurate, responses.

People even wielded the same arguments typically used by right-wingers following the deaths of Black Americans at the hands of police to make their point. Statements like “when advised to get the vaccine he should have just complied” litter the comment section.

While many of the responses expressed some level of empathy for Trujillo’s family and loved ones, other commenters utterly tore into the late officer. They felt his deeds in life, along with the circumstances surrounding his death, disqualified him from a compassionate response.

Some of the responses were really harsh.

This led to contention in the comment section, as many people expressed offense at the lack of compassion in some of the responses.

They pointed out that a man is dead and, regardless of his beliefs and actions in life, he deserves respect.

Many people used Trujillo’s death as a teaching opportunity. They urged anyone who is still hesitant about the vaccine to treat him as an example of the potential consequences. As one commenter pointed out, “The virus doesn’t care if you believe in it, or not. It’s just as deadly no matter what you believe.”

Trujillo was only 33 years old. As noted by many commenters, this virus comes for everyone, regardless of age, gender, or political leaning. The vaccines approved by the U.S. Food and Drug Administration are all proven effective in preventing severe illness or death from COVID-19.