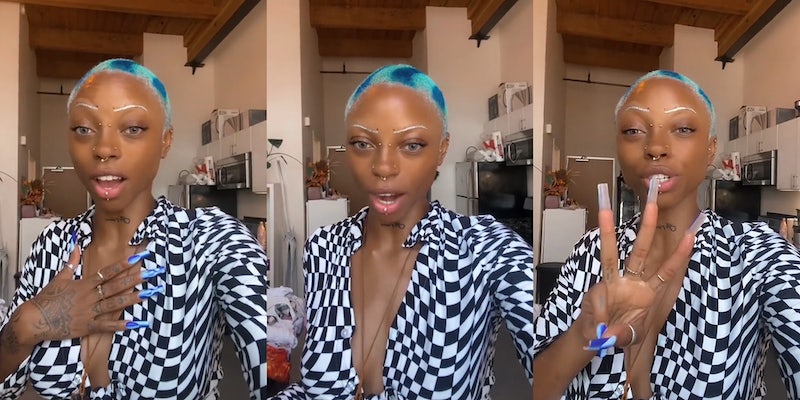 ‘Nobody is obligated to tip’: TikToker says they were denied service at restaurant due to previously not tipping, sparking debate

'Servers should not need to rely on tips.'

Recently, the discussion around tipping culture has sparked debate across TikTok, with some users saying tipping has now gotten out of hand while others argue that peoples’ livelihoods depend on it. Wherever you may stand on the issue, the discussion on the social media platform only continues to spiral.

The latest viral video, however, shares an example of what you might be in for if you decide not to tip at certain places.

TikTok user and artist Bueli (@Buelistic) has received more than 590,000 views on her video claiming she was denied service because of not tipping. In her video, the creator stitches another TikToker, who states, “nobody is obligated to tip.”

Bueli agrees with the TikToker, saying she is “absolutely correct.” As a tattoo artist, she says she encourages all her clients to tip tattoo artists, especially since she makes a living off of it. Still, she acknowledges that it’s not a requirement. The creator then launches into a storytime explaining how she and her friends were allegedly denied service at a restaurant because of not tipping in the past.

“So yesterday I went to a restaurant with somebody that I love, and we decided that this time we would turn our duo into a trio and we invited one of our friends,” she starts. “When we sat at the table, none of the servers showed up and one of the managers came by and told us that they would not like to serve us anymore.”

The manager’s reason for not serving the trio was because of tipping, the creator says. At this point, Bueli reiterates that as a tattoo artist she makes sure she tips everywhere she goes. However, she says her peers may not always do that or “have the finances to do so.”

“But do you feel like this is a good enough reason to deny service to somebody for the rest of their life if it’s based off of tips and the service isn’t always up to par?” she asks her viewers.

The majority of the thousands of comments were divided about the nature of tipping culture.

“I tip based SOLELY on service. I don’t tip just because I’m ‘supposed to’ I don’t go the percentages suggested if I get amazing service. I overtip,” one user wrote.

“My mom always says don’t go out to eat if you can’t afford to tip,” another commented.

Others shifted the blame entirely to restaurants and the service industry in general.

“its not on us as the customers to get dogged out because their employers don’t pay them a proper wage,” one user argued.

“Servers should not need to rely on tips, but the reality is establishments incorporate it into their pay… so sometimes base wage is $2/hr,” a viewer wrote.

Some commenters called out Bueli herself for comparing tipping culture in two entirely different industries.

“You can’t compare a tattoo artist to a server. One works and still makes an income w/o tips. The other only relies on tips. Not the same at all,” one viewer wrote.

Some attribute the non-tipping folk as the reason there’s a server shortage. According to an article on Business Insider published in January, this is true. While the federal minimum wage is $7.25 per hour, the standard of tipping leads restaurants to pay servers a mere $2.13 per hour.

“Tipped workers in more than 40 states around the nation take home less than the $7.25 minimum wage from their employers, with customer tips making up the rest of their paycheck,” the article states.

The article attributes the Great Resignation and COVID-19 as the major reasons why tipped workers are leaving the industry entirely.

“Nearly eight in 10 [of those leaving restaurants] say the only thing that would make them stay or come back is a full livable wage with tips on top,” Saru Jayaraman, director of the Food Labor Research Center at the University of California Berkeley, told podcast Pitchfork Economics.

Update 10:23am CT Sept. 12: In an Instagram direct message to the Daily Dot, Bueli explained that she and her partner had known of the restaurant for at least six months. While Bueli always tipped, noting that the last time she was served at the restaurant, they tipped the server $20, she says her friend who joined them only tipped previously if they had the means to do so.

She also further described their interaction with the restaurant’s manager, who talked to them after they had been waiting at the table for 10 minutes.

“The manager showed up and told us that multiple staff members have expressed that they would not like to serve us and asked if we could leave the restaurant,” Bueli said. “When we asked why, they explained that they feel like they ‘can never get it right here’ and that he isn’t too sure why, because he hasn’t had a bad experience with us personally, but has to respect that they no longer would like to serve us.”

When Bueli’s friend requested to speak with those who had a problem with them to figure out the issue, the manager returned to explain that it was due to tipping. “The manager came back after 10 mins and told us that ‘if it really has to do with tipping, it’s probably a big reason for them,'” she said.

The TikToker added that she doesn’t plan to return to the restaurant, as her friend believed they were denied service due to racial profiling. “I also boycotted this restaurant because another friend, the third person felt that they were racially profiled,” she wrote. “As a spiritually aware person, I don’t feel comfortable accepting food from beings with potentially negative energy towards me.”

Still, Bueli argued that the issue lies with servers not being paid a fair wage by their employers. “As many people had explained on my page before me,” she concluded, “I feel like the servers should be paid a livable wage first and foremost. Then tipping can just be what it was meant for, to show appreciation for their service.”