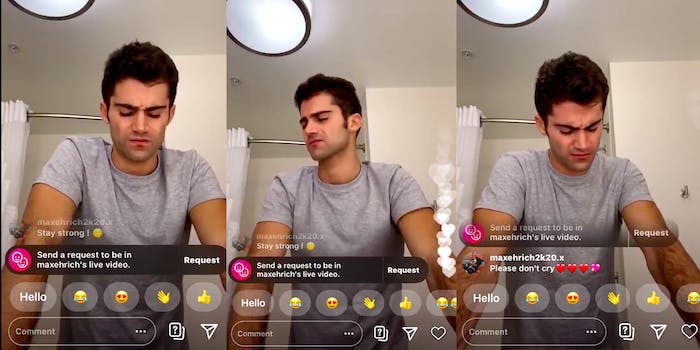 Things are getting more complicated with Demi Lovato and her ex-fiance, Max Ehrich. Days after last week’s public breakup, Ehrich made an Instagram Live video in which he appears to break down crying and accuses Lovato used him as a “calculated PR stunt.”

But Twitter users called B.S. on Ehrich, calling him “manipulative” and accusing him of faking the tears.

According to the Daily News, the pair began seeing each other at the start of the pandemic and were “basically together 24/7.” The couple posted their engagement photos towards the end of July with captions like, “I knew I loved you the moment I met you.”

But after the couple announced their engagement, Ehrich’s old tweets surfaced that showed him he fawning over female celebrities. In some, he pitted Lovato against Selena Gomez and said Gomez was prettier than his now-ex-fiance.

Lovato came to her beau’s defense and claimed the images were fabricated. But news of the couple’s breakup was confirmed by People and E! News less than two weeks later.

On Friday, Max attempted to clear the air by going on Instagram Live. “I was in love, the whole world should freaking know it,” Ehrich said in the video. “I thought I found the real deal but now I found out that I was used … You just lost someone who loved you fully, completely, infinitely. Forever.”

He then began to break down in tears (though many on Twitter accused him of fake crying).

Twitter user @mariamjIo posted a short clip of his breakdown. “Max ehrich went live and fake cried over his breakup with demi lovato,” the user tweeted. “Since his break up he’s been publicly manipulative and erratic. this is exactly how men gaslight you into thinking you’re responsible for his mistakes. it really happens to all women.” The tweet received more than 15,000 likes.

A source told People magazine: “It was hard for Demi to admit she made a mistake when it came to Max.” But a different source confirmed that the musician was doing “OK” and that this breakup was “a good thing.”