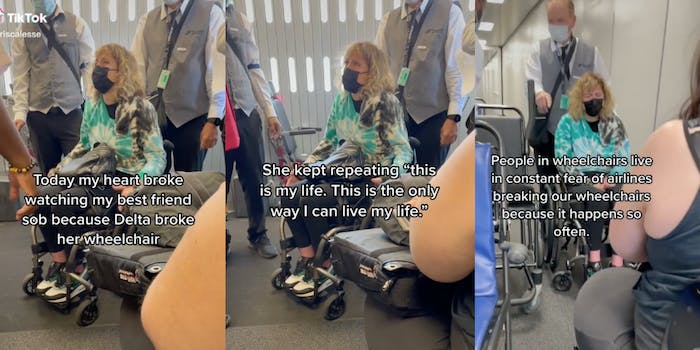 'This makes me so upset.'

A viral TikTok video shows a woman who has a disability breaking down after Delta Airlines employees allegedly broke her wheelchair.

TikToker Bri Scalesse uploaded a video on Friday, showing her friend, Geeg DeFiebre, crying as a Delta employee is seen inaudibly explaining something to her.

“Today my heart broke watching my best friend sob because Delta broke her wheelchair,” read a text on Scalesse’s video. “She kept repeating ‘this is my life. This is the only way I can live my life.’”

DeFiebre told the Daily Dot that her wheelchair was in perfect shape when she handed it to the staff at John F. Kennedy International Airport in New York.

“My wheel was warped and mangled when I exited the plane in Phoenix,” she said.

“As soon as I sat down in my chair and saw my wheels, I realized that something was wrong,” she added. “The wheel was so warped that it was impossible to push because it would dig into the side of my leg instead of rolling straight.”

In the video, Scalesse says that people in the disabled community are in “constant fear” of airline staff breaking wheelchairs—something DeFiebre also echoed.

DeFiebre told the Daily Dot that on the flight in question, she was accompanied by a friend who was flying with a voucher she received from Delta after Delta allegedly damaged her wheelchair on a previous occasion.

She said she always leaves a note on how to handle her chair, however, it was of no help on this occasion.

According to a Newsweek report, airlines across the country mishandled more than 300 wheelchairs and scooters belonging to passengers in just March alone.

“Wheelchairs are an extension of someone’s body and required for them to be able to move about through the world. They are custom-made, expensive, and take months to get,” DeFiebre added.

She accused the airline of also breaking her luggage but said she can’t be worried about that given she is focused on her chair.

She said Delta offered to cover the cost of replacement wheels, along with the shipping cost required for her to send back the wheels to a person who loaned her a spare after hers broke. The charges for their checked baggage were also waived, she said. She told the Daily Dot Delta has not yet ordered the wheels.

In an update posted on Scalesse’s TikTok account on Monday, both deFiebre and Scalesse thanked viewers for their support and for reaching out to Delta on their behalf.

Update 1:55pm CT, May 27: When reached for comment, Delta Airlines told the Daily Dot in a statement that it is in contact with DeFiebre “about compensating for replacements” but did not comment on whether the wheels have been issued yet. It also apologized for the incident.

“We know our customers with disabilities rely on Delta for their travel needs, and we fell short here,” it said. “We’re conducting a full investigation of what happened, because we must be better.”