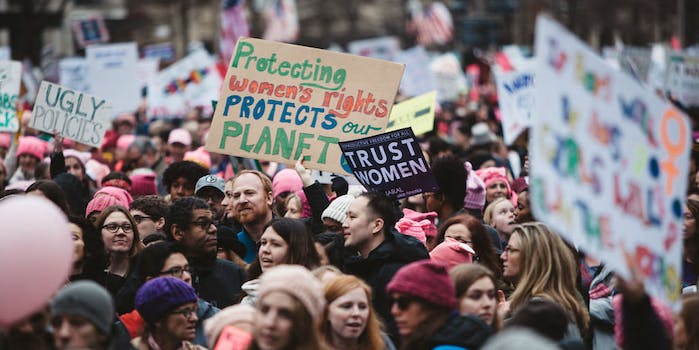 Women around the world will go on strike on Wednesday

On Jan. 21, the day after Trump’s inauguration, millions of women around the world marched for equality. Participants and organizers promised the massive protests were just the beginning of a coordinated effort to resist the new administration’s attacks on women and marginalized communities.

This Wednesday, they’re keeping their promise.

“A Day Without A Woman” is a national women’s strike conceptualized by the organizers of the Women’s March on Washington. It takes place on International Women’s Day, alongside the International Women’s Strike, which organizers began planning back in October with the help of feminist groups in more than 40 countries. Whereas the success of the January marches hinged on women taking to the streets (which millions did) to make their voices heard and their anger felt, the premise of the women’s strikes is the opposite: to underscore the importance of women by effectively making them disappear for a day.

According to its site, A Day Without a Woman aims to “highlight the economic power and significance that women have in the U.S. and global economies” by encouraging women to take the day off from both paid and unpaid labor. (Wondering how to ask for a day off as an act of political defiance? Not to worry, organizers have provided a formatted letter ready to be signed and sent to your boss.) Striking women who aren’t content sitting at home all day can also participate in rallies in cities throughout the country. Male allies are invited to participate by taking on a larger role in childcare and domestic work, and by advocating for equal pay and family leave.

While organizers and participants hope to make a statement through the conspicuous absence of women in the workplace, it’s important to understand that being able to participate in any kind of strike is an enormous privilege, and one that’s not easily afforded to women who don’t have the job security to request a day off, or the financial means to miss a day of work. To make the event more accessible and inclusive, women and supporters of gender equality are invited to participate in two other ways, in addition to the general strike:

According to the organizers, red symbolizes love, leadership, ambition, and determination. The color was also chosen because of its association with the labor movement.

It’s yet to be seen how much of an impact the women’s strikes will have, but the event has garnered a huge amount of media attention (both positive and negative) and substantial buzz on social media.

A school district in North Carolina made headlines with the announcement it will be closed on Wednesday due to so many of its staff (75 percent of which are women) planning to take part in the strike. “Chapel Hill-Carrboro City Schools values and supports its female employees,” the district clarified in a statement. “However, the decision to close schools is not an endorsement of the planned demonstration. The decision is made solely to avoid operating school on a day when there is insufficient staff to provide instruction and basic school services.” Wednesday will be classified as a teacher work day.

On Feb. 17, thousands of immigrants skipped work in a similar action of resistance called “A Day Without Immigrants.” Some businesses closed in solidarity with the protesters, while others were forced to close due to lack of staff. Around 100 people across the country were reportedly fired for taking part in the strike.

The organizers of A Day Without a Woman recognize the possibility that some women may be fired as a result of their participation in Wednesday’s protest. The event’s FAQ page acknowledges that “women of color, women with disabilities, LGBTQIA and gender nonconforming individuals, Muslims and other vulnerable groups are at a much greater risk of employer retaliation,” and encourages participants to “use [their] privilege on behalf of others when it is called for.”

Despite the potential consequences, organizers maintain that the risk is justified: “Social activism is not a privilege. It is a necessity born out of a moral imperative and an imminent threat.”