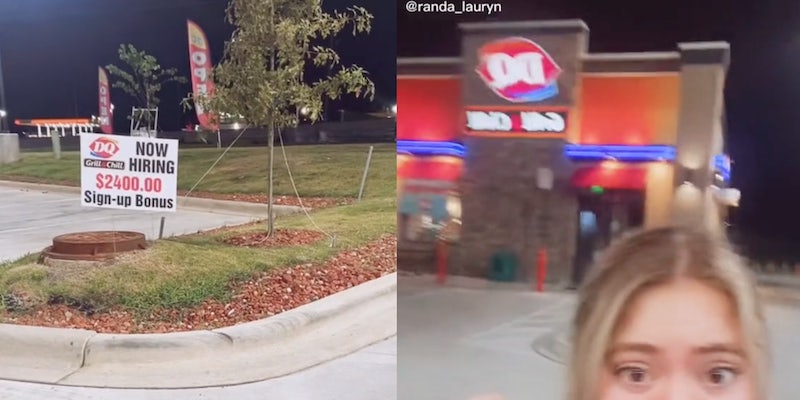 With the shortage of workers sweeping the U.S., many businesses have begun offering incentives for new employees to sign on—but the reaction to a viral video of a Dairy Queen sign advertising a $2,400 signing bonus shows how people are reluctant to take such offers at face value.

The video shows a young woman filming the sign outside of her local Dairy Queen location, with no verbal or written additions. Yet, it’s gained 11,000 likes and 518,000 views on TikTok since it was posted on Aug. 16 by @randa_lauryn.

Commenters shared their doubts about the advertised bonus in the comments.

Some expressed their doubts about the likelihood of actually being paid the bonus in a reasonable amount of time. Multiple commenters speculated that there was some kind of period required to be worked before the bonus is paid out, from six months to a year. “They don’t tell you that you have to work there for a year to claim it,” one commenter wrote.

Others suggested that any workplace offering a sign-on bonus might be a signal that “it’s probably not a great place to work.” “But sometimes we gotta hustle where we can,” they added.

One commenter—who managed to secure the handle @thatveganteacher—claims they work for Dairy Queen and already collected the first half of a $3,000 bonus.

And, still, others speculated that the company might try to avoid paying it altogether.

The Daily Dot has reached out to Dairy Queen about this specific advertisement for new hires.