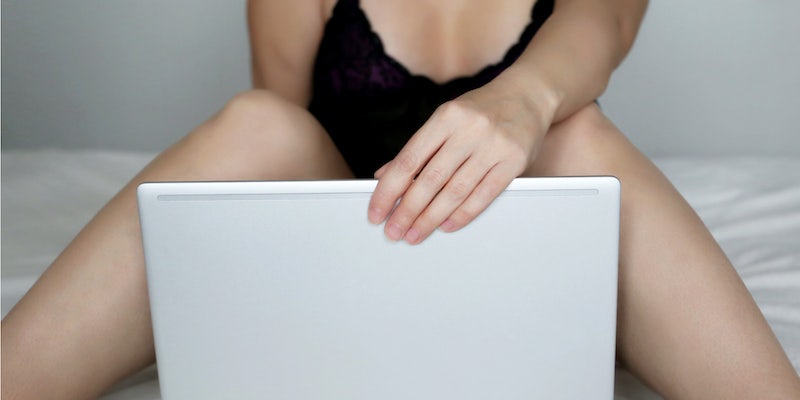 ‘He needs to be reported to the police’: OnlyFans creator says her dad secretly subscribed to her account for over a year in viral TikTok

She says her dad, who sexually abused her, subscribed under fake names.

In a series of TikToks posted on Jan. 28, TikTok and OnlyFans creator Karla Ramirez detailed the childhood sexual abuse she says she suffered from her father and other adults, which culminated in Ramirez discovering that her father subscribed to her OnlyFans account under fake names.

In the overlay text of her initial video, which has been viewed over 8 million times, Ramirez wrote that she found out her father had been subscribed to her OnlyFans via two different accounts for “over a year.” According to Ramirez’s TikTok, she was 18 years old in June 2021 (OnlyFans users must be 18 years old and provide a photo ID to share content).

“The only way I found out is because he had called me to ‘play with myself’ for $150 and I could hear my mom in the background talking on the phone,” she said. In the caption of the video, Ramirez wrote that “it’s not illegal for your [father] to buy your nudes.”

Other TikTokers have shared Ramirez’s story, as well. Commenters expressed sympathy for Ramirez and asked her to share more information.

“[My father] has been sexually attracted to me since I was really young,” Ramirez said in a follow-up TikTok. “To the point that when I was 4, he would take me to his friend’s house or a girl he used to be seeing and let them touch me.”

She also said that her father contacted her when she was a minor using fake social media accounts, sent her pictures of his penis, and asked her to rate the photos “for money.”

“So he’s just been building the sexual attraction for years,” said Ramirez, her voice breaking. She also shows screenshots of her father’s alleged fake Snapchat accounts and what she said to him via Snapchat after she realized he had been a client of hers on OnlyFans.

She also showed screenshots of her CashApp and said the payments are from her father under another fake name.

“How fucked up?” Ramirez said. “He really fucked me up.” She said that her “childhood trauma” was never truly addressed and that “whenever [she] got sexually assaulted,” her mother didn’t believe her.

The TikToker said her mother was “out of the loop” and “unaware” that her father sexually abused her.

Ramirez said that she confirmed it was her mother’s voice in the background of her father’s phone call, then went to her mother’s house and told her mother to call the police. Ramirez also said her father was immediately defensive, and she “started beating” him.

“It was so obvious, I didn’t even need to say why I was there,” Ramirez said. “He was immediately trying to cover his ass.”

She said she told her mother the situation, and her mother “automatically” believed her because her mother had known about one of her father’s social media accounts under a fake name. Ramirez called her mother’s behavior “child endangerment.”

Ramirez said that her father financially supported her mother, who is mentally ill. She also explained that her mother and brother are currently staying at her grandmother’s house.

A commenter on one of Ramirez’s TikToks called the situation “one of the sickest things [they’ve] ever heard in [their] life.” Others offered Ramirez legal advice.

“Do not feel bad for him, do not let your mother influence you either,” commented @masssyjerez. “Go at him full throttle, get an attorney!”

“The photos he sent himself are incriminating,” wrote @ratacoochie12345, referring to pictures the father allegedly sent to himself when he took Ramirez’s phone away as a minor. “He needs to be reported to the police.”

“Please please get a lawyer and prosecute to the full extent,” commented @maitav38. “He’ll do it again to someone else.”

The Daily Dot reached out to Ramirez via email.