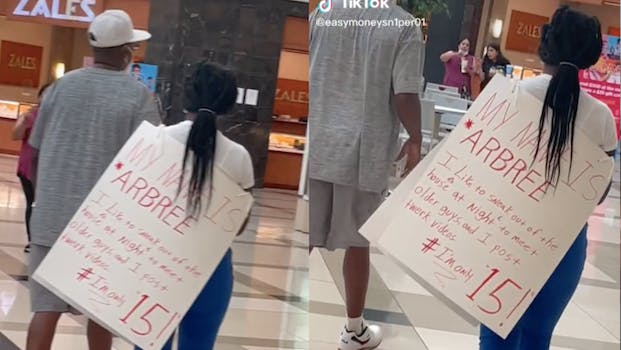 A TikTok video of a father publicly shaming his daughter for posting videos of herself twerking has gone viral, sparking a debate in the comments section.

The video, seemingly reposted by @easymoneysn1per01, shows the father walking in front of his daughter while she wears a sandwich board. It is unclear where the video was film or originally posted.

“My name is Arbree,” the poster reads. “I like to sneak out of the house at night to meet older guys and I post twerk videos. I’m only 15.”

Only their backs can be seen in the clip, and it appears they are at the mall. Since being posted on Monday, the video has garnered over 1 million views and over 13,000 comments.

Many of the comments focus on the actions of the young girl and laud the dad. The top comment, with over 32,000 likes, reads: “My respect for the dad.” Another comment reads, “He’s teaching her a good lesson.”

Other commenters, however, came to the defense of the young girl, with one person writing that a good dad would not publicly humiliate his daughter in that manner. “She’s going to remember this shame well into adulthood and probably never close to him again,”one person wrote. “Parents think love is unconditional when it’s not.”

“That’s not how you parent,” another said.

There were a few comments that pointed out that the girl is not at fault for sneaking out to meet older men. “So he just ignores that these older guys were grooming his 15-year-old daughter?” one questioned.

“What he really should be doing is holding those older men accountable for (their) actions on a 15 YEAR OLD,” a second said.

And others simply shamed the commenters who think this parenting tactic is OK. “This comment section didnt pass. … This is not OK,” one said.