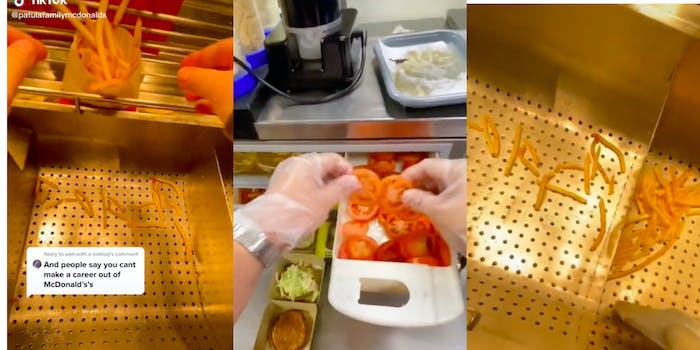 'Just because someone was able to make a living wage 30 years ago as a crew member and work their way up doesn't mean you can now.'

A TikToker sparked a debate after revealing in a viral video his father went from working the grill at McDonald’s to becoming an owner of a location.

“Our director of operations, supervisors, and all of our general managers all started off as crew,” Patula explains in the video. “You can make a career out of anything, you just have to start somewhere.”

The video gained over 653,000 views since it was posted on Monday. The comments section immediately broke out into a debate, with many arguing that “times are different.”

One person wrote, “Just because someone was able to make a living wage 30 years ago as a crew member and work their way up doesn’t mean you can now.”

Others, however, agreed with Patula. “McDonald’s doesn’t hire from outside the company for higher positions. Everyone starts at the bottom,” one said.

The comment that Patula was responding to came from a video in which Patula says he loves his job, even after working there for 14 years. In the video, he explains that he became a manager at 14 and that his title now is area supervisor. He says he oversees two McDonald’s locations in Ohio. Patula also mentions that he’s in the “owner-operator program.”

The Daily Dot reached out to Patula for comment.