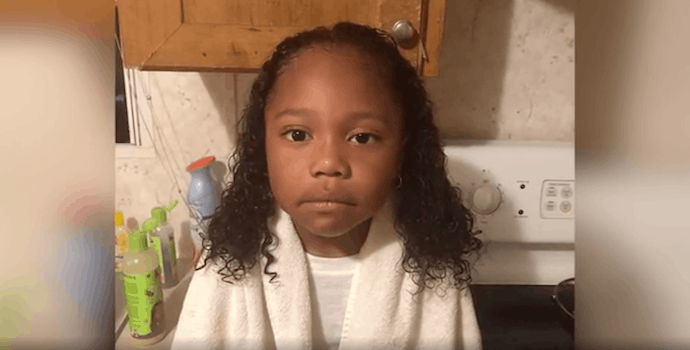 Instead of recess for 4-year-old Michael Trimble, his school demands a hair cut or a dress.

On his first day of school recently, Michael’s grandmother was called into the principal’s office at Tatum Primary School. Michael was not in trouble for bullying on the playground or causing mischief in the classroom.

“[The superintendent] told me that I could either cut it, braid it and pin it up, or put my grandson in a dress and send him to school. And when prompted, my grandson must say he’s a girl,” Randi Woodley, Michael’s grandmother, told WTHR.

Administrators from Tatum Independent School District in Texas enforce a dress code where male students can not have hair longer than their T-shirt collar. Additionally, the rule prohibits male students from wearing “ponytails, ducktails, rat-tails, male bun or puffballs.” Some Tatum parents call this racial discrimination toward African-American male students, according to CNN.

“So I politely told him that from that day forward, I would get my grandson’s hair braided. I would pin it up, but I would fight that dress code with everything in me,” Woodley told CNN.

The other solution the superintendent offered was for Michael to change his gender identity. Under federal law, students transitioning genders are permitted to do so and thus do not violate school dress code.

Instead, parents are calling out an alleged lack of protection provided for students of color. This includes Kambry Cox and her son Kellan. Also members of Tatum ISD, Cox said the school similarly reprimanded Kellan for tying his dreadlocks back out of his face, according to WTHR.

Outraged by the schools’ actions, a petition in support of Michael earned over 8,200 signatures.

Some are taking to Twitter to voice their concerns.

“What an awful superintendent. Making someone cut their hair or kicking them out of school. What trash the management is at this school district,” @williedawgy tweeted on Tuesday.

What an awful superintendent. Making someone cut their hair or kicking them out of school. What trash the management is at this school district

Last month, an elementary school in Georgia deemed appropriate and inappropriate haircuts in classrooms: Its photos only featured African-American students.

Tatum ISD was unable to comment to the Daily Dot by the time of publication. In a press release, the school district denies any wrongdoing.

“Recently, social media claims have been made that Tatum ISD’s hair code is racially discriminatory and that District administration suggested a student identify as the opposite sex for purposes of limiting the applicability of that policy. The District vehemently denies these claims,” Tatum ISD said in the press release.