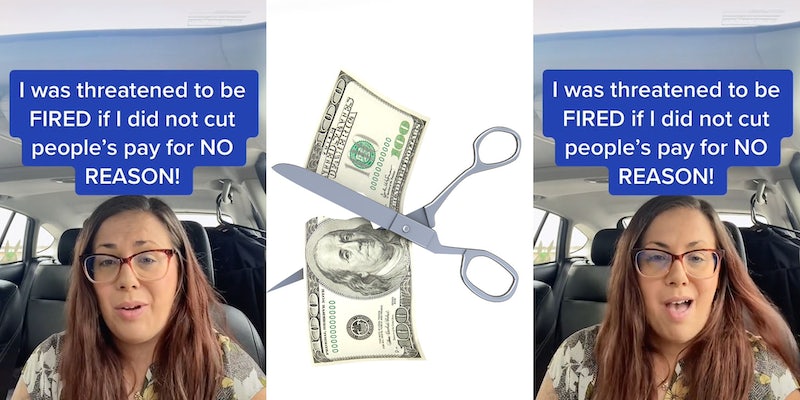 ‘It’s not OK to take money away from hard working people’: A woman claims her boss ordered her to secretly cut employee’s pay—so she quit

'Work for someone that values you and isn’t a complete scumbag.'

A woman on TikTok claims her boss told her to retroactively cut her employees’ pay without notice, so she left her job. Her story has ignited on the platform and racked up over 190,000 views. Users are lending their support and some even suggest that she take legal action.

The first video by user @pancakewitsyruptraps starts with a suggestion. “If you ever wanted to quit a job in a blaze of glory,” she says, “I did that today.”

Two weeks prior, she says she received a threatening voicemail from her former employer.

He allegedly demanded that she not only cut employee’s pay, but take it out of their last paycheck and do so without warning them. If she refused, she’d be fired.

User @pancakewitsyruptrap notes that the business was currently profitable with “quite a large amount on the bottom line.”

She tried to reason with him to no avail. The savings would be insignificant, she argues, compared to the drastic harm it would cause employees. He allegedly wouldn’t hear it.

So one night, she drove to the office and cleared out her desk. The next morning, she came in to inform her employees about the alleged ultimatum. She wanted them to know “this is the type of person they’re working for.”

The TikToker ends the video with a warning to workers everywhere.

“It’s the Great Resignation y’all,” she says, referencing the nearly 40 million people who left jobs in 2021. “Work for someone that values you and isn’t a complete scumbag.”

Users were in awe of @pancakewitsyruptrap’s strength, saying she did the right thing standing up to the attempt to cut employee’s pay.

“This kind of integrity is hard to find these days. I hope she wins the Powerball or something, she deserves it,” one viewer wrote.

Many were adamant that she take legal action against her former employer.

“Sounds like a lawsuit for being expected to do illegal actions. Retroactive pay reduction is wage theft, and you’d win that lawsuit easy,” one user said.

“Keep the receipts call the labor board,” another added.

The Daily Dot has reached out to @pancakewitsyruptrap via Instagram message.