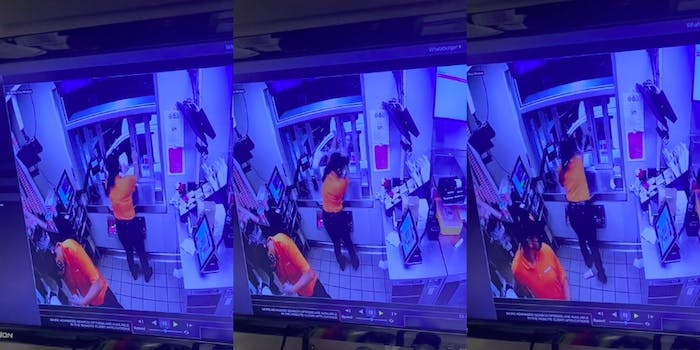 The worker dodges the drink and throws the bag of food at the customer.

A viral TikTok shows a customer throwing their drink at an employee in a Whataburger drive-thru. According to the user who posted the video, Von Lopez (@vonmarie22), the customer was incensed over a couple of cents.

The eight-second video, which appears to come from the place’s security camera, amassed over 5 million views. In it, an employee opens the drive-thru window to hand the customer their meal. The customer throws their drink through the window. The employee dodges the drink and throws the meal at the customer before shutting the window.

There was some confusion in the comments section about the entire interaction because it was hard to see what was thrown. Along with this, users praised the employee for their reaction, with one commenter saying, “Normalize matching the customer’s energy.”

Lopez posted a follow-up video with some context. Lopez said one of the employees is their daughter, who told the customer that she was “short” when paying for her meal. “The customer got a dime and tossed it at my daughter,” the text in the video reads. “My daughter stood there and was like ‘Oh okay, that’s what we doing’ and tossed the change right back.”

The text continued, stating their daughter went on about her job like nothing happened. The customer then “tossed her drink to the innocent guy before getting whatasmacked by her whatameal.”

In yet another follow-up, Lopez clarified a few things and said via text that their daughter still works at the restaurant. “Manager said ‘Welcome to early bird’ and all laughed it off and kept it going,” Lopez wrote.

The Daily Dot reached out to Whataburger and Lopez.