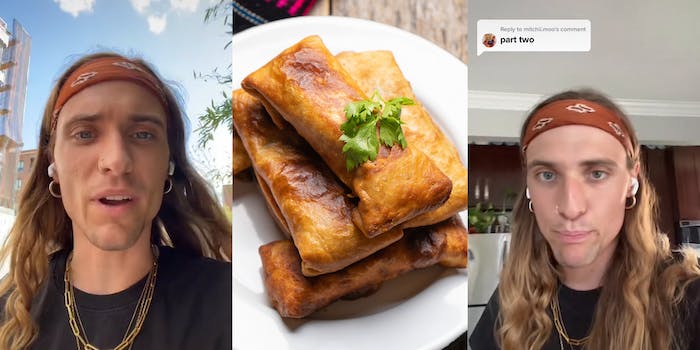 ‘My boss told me to do it’: Server says customer asked them to spit in their food and their manager agreed

‘This is obviously a kink thing, and I do not want to do that right now.'

A server on TikToker said their manager OK’d a customer’s request to have them spit in the customer’s food in what the TikToker describes was “obviously a kink thing.”

User Mitchell Todd (@mitchii.moo) shared what allegedly went down in a two-part storytime.

In their video, Todd says they were working a slow brunch shift, acting as both host and server, when one of their customers asked them to spit in his food.

“I am sure, I am positive, I have misheard him,” they recall. “There is zero doubt in my mind that that was a mistake. So I’m like, ‘I’m sorry, you think someone spit in your food?’ He’s like, ‘no, I was kind of wondering if you would spit in my food.'”

@mitchii.moo i swear the story is worth it #storytime ♬ original sound – Mitchell Todd

After telling the customer they don’t think they are allowed to do so, Todd says the “super insistent” customer then asked to speak with a manager.

The worker indicates they were initially relieved the customer wanted to speak to the manager. “I was like, ‘Thank God, yes. I will absolutely let my manager handle the rest of this,” they say.

Then, upon realizing who is working as the manager, Todd indicates they became concerned. “And I realize, ‘Shit. This is the kind of manager who values the customer experience over anything else. Customer is always right,'” Todd says.

Todd says the manager speaks with the customer for a bit before approaching the server to encourage them to “Just do it.”

In a second video, Todd says they reluctantly spit in the customer’s food, telling the customer, “My boss told me to do it.”

The customer, Todd says, then asked for a larger amount of saliva.

“My mouth is suddenly so so dry, and I try to spit a little more, and then he’s like, ‘Try to hawk it up,'” they said.

Todd says they were asked to spit on each of the customer’s chimichangas.

“He proceeds to inhale that food,” Todd says.

While Todd says the restaurant’s tips are pooled, they were allowed to keep the full amount after talking with their manager—they say it took “some convincing”—due to the nature of the request.

The manager was fired the same day, Todd says, as the customer left a Yelp review for the restaurant stating that the staff will spit in food on command, as long as they talk to that particular manager. Todd was not named in the review, they say.

“I got $100 and my least favorite manager got fired, so it could be worse, I guess,” Todd concludes.

Viewers in the comments expressed sympathy for Todd and were critical of the manager, who allowed this request to be filled instead of telling the customer no as Todd did not consent.

“The manager really didn’t let you consent to that?!?!?” one questioned.

Another argued the manager “should’ve had your back.”

“I’m sorry you experienced this. [The manager] deserves to never work in the service industry again,” they wrote.

“You 100% should have not been forced to do that. It should have been an automatic no,” a third wrote.

The Daily Dot reached out to Mitchell Todd via Instagram direct message.