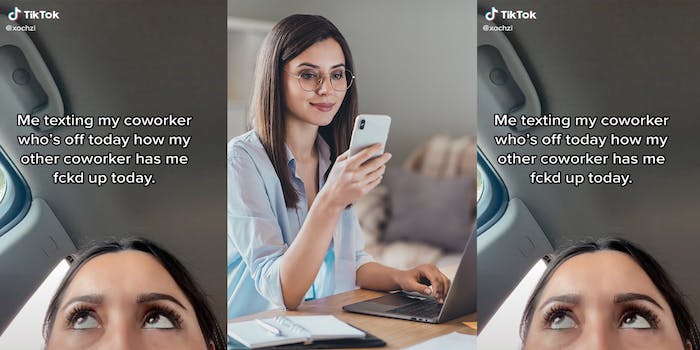 ‘Don’t do this’: TikTok video about texting co-workers about who is f*cking up at work sparks debate

'When I’m not at work I don’t want to hear about work.'

A viral TikTok video depicting a woman texting a co-worker on her day off about another employee who is bothering her at work has sparked debate.

The video, which has been viewed more than 1.6 million times since being uploaded last week, shows the TikToker known as @xochzi fervently texting from her vehicle alongside sound effects from the film Minions.

“Me texting my coworker who’s off today how my other coworker has me fckd up today,” the description states.

The video appears to have struck a chord with countless users, who either related to the situation or felt that the TikToker was endangering her employment status.

“Me to my favorite manager and then we both start laughing,” one user said.

Dozens of other users tagged their own co-workers in the comment section, noting that they too did the same thing.

“This was me with my best friend when we worked together, like EVERY DAY,” a user named Jenny added.

But others argued that hearing about work on their day off was not ideal and a waste of time.

“When I’m not at work I don’t want to hear about work,” another user said.

While some were perplexed over the concept of being friends with co-workers, others warned the TikToker against continuing to gossip.

“Dont do this cuz they will backstab u just for the adrenaline rush,” one commenter stated.

The Daily Dot reached out to @xochzi for comment on the viral video but did not receive a reply by press time.