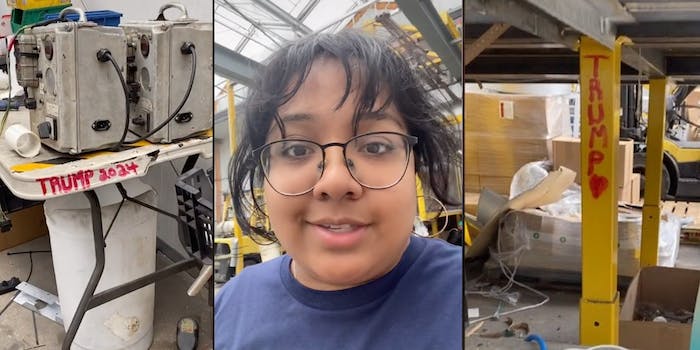 ‘This was definitely targeted’: TikToker’s co-worker writes ‘Trump 2024’ over her workspace in viral video

'At least he is gone and I feel somewhat safer'

A Canadian woman’s TikTok went viral for showing the Trump-inspired vandalism committed by one of her coworkers throughout her workspace.

According to the TikToker (@smilemoonchild) the coworker was eventually fired for his actions.

In the original video posted on Aug. 29, the TikToker, who is based in Hamilton, Ontario, shows her workspace which appears to be a factory or warehouse setting.

She explains that many of her coworkers worked the previous day, which was a Saturday, but that she did not. When she returned to work Sunday she noticed her section was vandalized.

The “Trump” graffiti was done in what looks like red paint and is shown in five separate instances in the video.

“I already reported it to HR and they said they’re gonna deal with it and they’re gonna go to the director of human resources,” she says. “This was definitely targeted towards me because it’s only in my section.”

She also says the man she believes committed the vandalism would be out of work and on vacation for the next week.

“Not only was this intentionally targeted towards me but it’s also fucking vandalism in the work place,” she continues. “Like, hello, are you stupid?”

The TikTok has received over 141,000 views. A second TikTok was posted on Sept. 4 after another user asked for an update.

“We were all so, so, so shocked when he actually showed up yesterday,” she says of the coworker who returned from vacation. “The second he walked through that door I went to my supervisor and told him, ‘Listen, if this guy is staying and nothing is happening to him I’m done. I’m leaving and I’m going home, that’s it.’”

She says after that conversation took place, the management team came to her and told her the situation was “under control.” However, she says they hadn’t updated her on her complaint in the week since the incident occurred, and other people were looped in despite it directly involving her.

“And tell me why this guy got to work a full day and then get his termination letter at the end of the day. Make it make sense,” she says.

Many TikTokers commented that this is a normal practice among companies when firing people.

“Usually firing happens at the end of the day bc it minimizes ‘workplace disruptions,’” wrote @shainrylie.

“They do that because if they send him home early in the day, they still have to pay him for the whole day. So they are cheap and want the day worked,” said @rachel_moonpie.

“Girl he got fired. Why are you mad that it happened at the end of the day?” commented @tuskgrabber.

She says that at 3 pm he was given his termination letter and was escorted out of the building.

“He had such a smug smile on his face, and the funny part is, apparently, from what I heard, he thought he was getting terminated because he was constantly late,” she says. “Then they told him, ‘Uh, no, it’s because of the multiple misconducts that you have done here.’”

She says he then said that made sense, shook everyone’s hands, and told everyone goodbye.

“At least he is gone and I feel somewhat safer, I guess. That guy was seriously a piece of shit.”

Most people in the comments were happy with the outcome but had some words of advice as well.

“Well well well, if it isn’t the consequences of my own actions,” agreed @mariiella0.

“The 🐀 that got cut at my old workplace would sit in the parking lot and watch us from his car. 😬No one knew until for weeks,” commented @eleeargh.

The Daily Dot reached out to the TikToker via comment section.