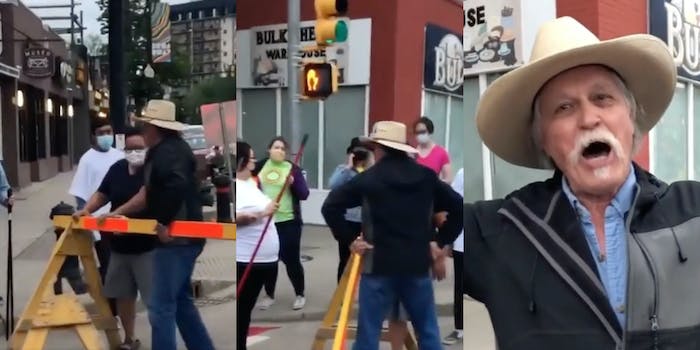 At the end of the video, justice seems to come for the man.

In the U.S., we expect a certain level of hate and entitlement from some of our citizenry. In Canada, however, the global perception seems to be that the streets are occupied by kind, well-meaning folk who’ve never seen a swear word in their lives.

A recent video posted to Reddit’s r/PublicFreakout sees this perception flip, as a Canadian man displays his blatant homophobia for the world to see. The video, posted Thursday evening, has already collected 27,300 upvotes and hundreds of comments.

A group of LGBTQ+ individuals and supporters are just polishing off a new addition to Saskatoon’s Broadway Avenue as the video begins. The brilliant colors of a Pride flag are still drying on the crosswalk when the man approaches and begins dismantling the road barriers erected to keep the painting safe from traffic. Several members of the group move to stop the man, informing him that they have permission from the city to be there.

Still, the man—decked out like a proper cowboy, complete with hat and handlebar mustache—insists that the gathered people “don’t own this fucking property.” Hands planted on hips, he tells the group that they are getting “absolutely stupid” before making a second attempt to dismantle the barrier. Several members of the group follow him, quietly attempting to keep the barrier in place while cowboy Ken continues his rant.

The far larger group easily manages to regain each piece of seized barrier, inspiring the man to resume his accusations that the group is “stupid.” When he realizes a bystander is capturing the moment on film, cowboy Ken forces a boisterous laugh before stepping directly up to the camera and calling the group a “bunch of assholes.”

Standing a few yards away from the Pride crosswalk, the man can be seen conversing with a police officer in a clip attached to the end of the video. He informs the officer that he disagrees “with what is going on,” and therefore chose to force himself into other people’s business. He indicates that he is uncomfortable standing silently by while a Pride flag decorates his city, and so had no choice but to intervene.

A Saskatoon Police Service report identifies the man as a 71-year-old Quill Lake resident. He was arrested, charged with causing a disturbance, and is expected to appear in court on Nov. 24, according to the report.

A number of commenters found themselves poking fun at his cowboy vibes, questioning “who let Yosemite Sam out of the nursing home,” while others simply joked about the man’s unnecessary behavior with jabs like “That’s not very yee-haw of you, cowpoke.”

Some made accusations of internalized homosexuality, sparking a debate of their own in the comments, where people pleaded with their fellow Redditors to “stop with the perpetuation of the idea that homophobia is exclusively a problem caused by homosexuals.”