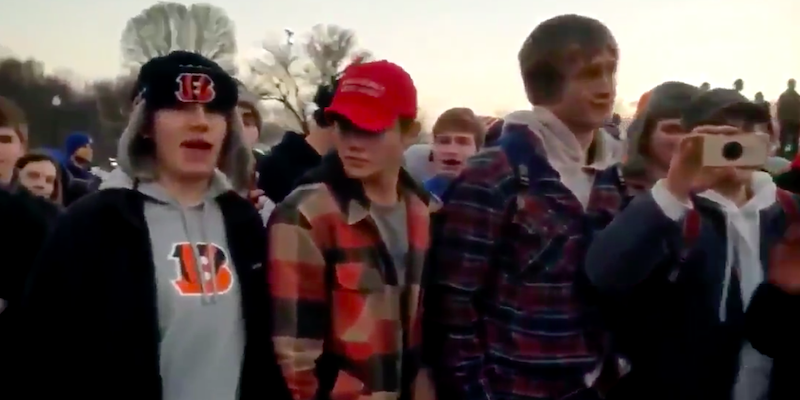 'It's not rape if you enjoy it,' one teen said.

After videos of teens in MAGA hats surrounding and mocking a Native American elder went viral this weekend, what seemed clearly like white entitlement and intimidation suddenly shifted to conversations about whether the teen at the center of it all was provoked by another group and deserving of sympathy. In case there are any questions about whether these young men, who were clearly, smugly taunting the elder, were misunderstood, several new videos will put them to rest.

Because white superiority and misogyny often go hand in hand, Covington Catholic High School students were also allegedly making misogynistic comments to women and downplaying rape on the day the group attended the anti-abortion March for Life rally and came across the Indigenous Peoples March.

Writer and lawyer Amee Vanderpool shared a six-second video from the Lincoln Memorial that day where, in a group that’s reported to be Covington students, one teen can be heard saying, “It’s not rape if you enjoy it.” (He also appears at the 13:40 mark in context with the larger confrontation here.)

Another woman posted a video on Twitter of a group of alleged Covington teens reportedly at the same event harassing her and her friends as they walked by.

“The Covington Catholic boys harassed my friends and I before the incident with Nathan Phillips even happened,” the Twitter user who goes by @linds wrote. “I’m tired of reading things saying they were provoked by anyone else other than their own egos and ignorance.”

The interaction was simple, she explained in a subsequent tweet. “We walked by, they started yelling, we asked them how old they were,” she wrote. “They replied ‘old enough,’ kept yelling, and we rolled our eyes and kept walking.”

She also said she could hear them saying “MAGA” and “build the wall.” “Some people say they hear ‘slut’ at the end of the video,” she wrote on Twitter. (The Daily Dot has reached out to @linds for comment and will update if we hear back.)

Covington’s student body is predominately white and the school has a documented history of problems with racism, homophobia, and “ingrained sexism,” as documentarian Alan Parsa wrote. In December, a Covington basketball player was arrested on three felony accounts for raping and sodomizing a woman.