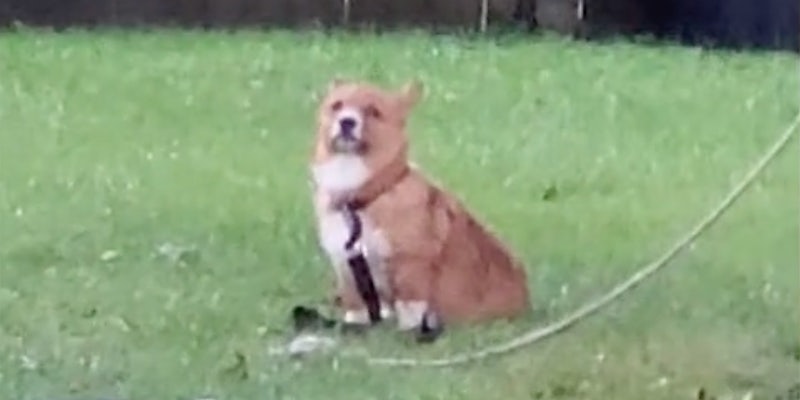 ‘Who chains up a corgi?’: TikToker puts dog owner on blast for tying corgis to tree during a storm

The TikToker ended up 'saving' the dogs.

In a viral video, a TikToker puts a dog owner on blast for tying corgis to a tree during a storm.

Posted by Kenadee Lynn (@kenadeelynn8), the viral video shows her crying because of two corgis she is filming are tied up to a tree during a rainstorm. The caption reads: “Saved these two scared soaked babies today. #SyncYourMiO #DontSpillChallenge #makeviral #animalabusshouldstop #help #animalactivist.”

The text overlay on the video reads: “If you own dogs, don’t leave them out in the rain!! Chained up with no food, water, or shelter from heat/rain.”

“As we sit in the car, this poor puppy is sitting in this f*cking storm,” Lynn later says in the video, showing the storm has worsened. “Motherf*ckers.”

The following scenes show two people holding wet corgis, with the overlay caption, “If you own dogs, don’t leave them out in the rain. Turns out, there were two of them.”

In a comment on the video, she wrote that “the dogs are safe!! I had finally got animal control to come help me get them out by the end of the video; they are at the shelter. I was told by the cops I wasn’t to touch the dogs. [The owners] could have sued me, and I also had my [1-year-old] with me at the time. I had proof of everything I was witnessing for proof of neglect of these 3-month-old puppies being left in a lightning storm.”

The video has been viewed 2.5 million times and liked over 550,000 times since being posted on Thursday.

Viewers are slamming the dog owners—and others like them—in the video’s comments section. “Some people do NOT deserve animals,” one said.

Many commenters seem to have particular affinity for the breed: “Don’t get me wrong; any dog chained up is bad. But a corgi bro?! Who chains up a corgi!?” one viewer questioned.

The Daily Dot has reached out to @kenadeelynn8.