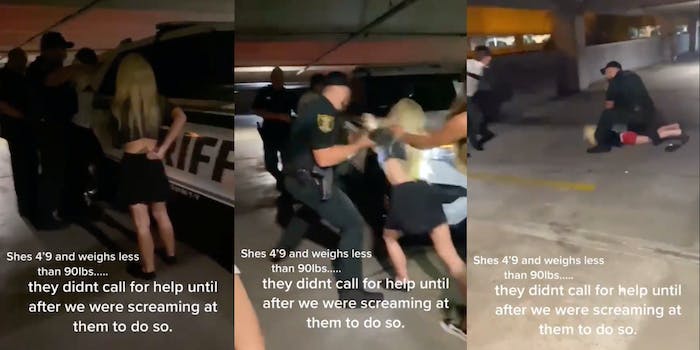 ‘Could have easily killed her’: Video shows cop slamming teenage girl onto pavement

'Cops are supposed to have a proportional response.'

A recent viral video shows a Florida police officer slamming a 17-year-old girl onto the pavement, prompting a conversation about police action and when aggression is appropriate.

The viral clip, which appears to be ripped from a TikTok (the Daily Dot could not independently verify the original poster), was shared to Twitter by user Marjorie Gaylor Queen (@Tim_Tweeted) on Sunday. The altercation takes place in a parking garage in Ponte Vedra, Florida, First Coast News reports.

A report from the sheriff’s office says that the girl’s companion, 19-year-old Austin Padget, was seen stowing something beneath a vehicle in the parking garage where the video was filmed. Deputies later determined it to be a firearm.

The cops are in the middle of arresting Padget when the viral video begins. Two officers are cuffing him against a police vehicle when a slender, blonde teen steps up to them and begins recording the arrest. What appears to be a wallet is stowed in the waistband of her skirt. She repeatedly reaches back to adjust it as police tell her to “stay away from that car, back up.”

The girl then takes a step closer to the police. She asks an unintelligible question before the cops again demand that she “back up,” and one officer grabs her by the arm. The girl flails and tries to pull away from the officer. When she gets her arm free, she tries to shove the officer in the chest.

That’s when the officer grabs the girl by her upper arms and throws her to the ground. He pins her down and appears to begin the process of arresting her, as her friends shout at the cops for slamming “someone who’s 90 fucking pounds on the ground.”

The cops ultimately arrested the girl and Padget. She faces a felony charge for battery of a law enforcement officer. A police report reviewed by First Coast News states that deputies found “a gun, drugs and alcohol on the scene.”

Some viewers derided police for reacting violently to yet another conflict, while others defended their actions. As many viewers pointed out, the girl attempted to interfere with an arrest before she was forced to the ground.

Others noted that police are public servants and are trained to respond to threats when they appear. Many people struggled to find a substantial threat in a small teenage girl and criticized the police officers for what they saw as an overreaction.

“Cops are supposed to have a proportional response,” @wrowe46 tweeted. “He used unnecessary force against someone who he outweighed by over a 100 lbs, and could have easily restrained in a humane way!”

“You act like the police officer is a wild animal that can’t control his actions?” @Russell_Arch tweeted. “If she’s impeding an investigation, cuff her, put her in the backseat. But when you toss a smaller person, face-first onto a concrete floor, YOU’RE the asshole.”

People who sided with the cops in this scenario also pointed out that the girl reached behind her back during the altercation. This gesture could pose a potential threat to officers, and some viewers felt it justified the aggressive response.

The deputy who took down the teenager will not face any disciplinary action. After reviewing the footage, the St. Johns County Sheriff’s Office determined that the officer’s response “was approved and deemed within policy.”