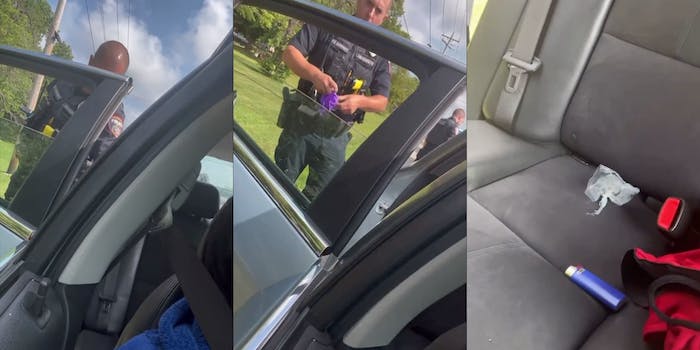 Video: Cop accused of planting evidence in a man’s car before inspecting it

The police department released its own footage of the incident in response to the viral video.

Viral video footage seemingly shows a police officer in Caledonia, Wisconsin planting evidence in a civilian’s car during a traffic stop before inspecting it.

The video appears to show a Village of Caledonia police officer approach the backseat of the vehicle and toss a torn up baggy inside. The man recording the video, seated in the front passenger seat, asked the officer, “what’s that?” to which the officer replied, “what’s what?”

The man in the passenger seat warns the officer that he had him on camera, but the officer casually responded that he also had video footage via his body camera.

“We’re all good,” the officer said.

The tweeted video quickly went viral with over 62,000 retweets and almost 8,000 comments.

Several Twitter users backed Ooze, shocked that the officer did such a thing.

“There is no doubt he threw that bag in. Unbelievable,” user @securlyblankist tweeted.

“He even turned his body so it won’t show up on his body cam,” user @charliebrown160 accused.

“It’s the casualness that revolts me,” user @Meinhart_BXL said.

Several other viewers withheld their immediate judgment, urging the police department to post the body cam footage from the officer.

Christopher Botsch, Chief of Police at the Village of Caledonia Police Department, issued a statement on Facebook on July 24.

After the vehicle was stopped for driving 63 mph in a 45 mph speed zone, the driver and rear passengers were removed from the vehicle, according to the statement.

The officer who conducted the search handed the corner tear to another officer on the scene, who was seen in the cell phone footage. Since the bag was empty, the officer tossed it in the backseat of the car.

“This is what was observed in the video,” Botsch stated.

According to the statement, no arrests were made, and the only citation arising from the incident was a speeding citation for the driver of the vehicle.

“No. Absolute BS. Look how he puts the glove on after he drops the bag like he’s gonna start being careful and not contaminate any evidence he “finds,” one Facebook user commented on the statement.

“Every single one of those officer’s arrests needs to be thoroughly investigated,” another viewer said.

“What was the probable cause for them being searched in the first place? You don’t search someone’s car because they’re speeding!!! This video is some bs and the statement made! Show the alleged 6 hours of footage, we got time!!!!” another Facebook user pointed out.