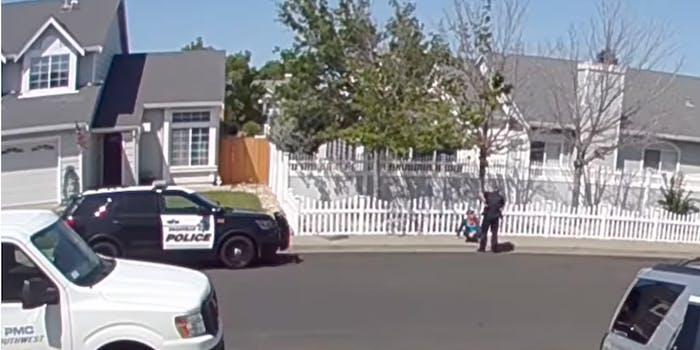 'NO child, disability or not, deserves to be treated like this.'

A video of a police officer throwing and punching an autistic teen is sparking outrage online.

Adam Wolf posted home security footage of a Vacaville, California, police officer trying to restrain his 17-year-old son Preston to Facebook. In one video, the officer can be heard demanding the boy to sit and Preston complies. When the officer moves in toward the boy, Preston starts to run, which is when the officer throws him to the ground. In a second video, the officer yells at the boy to put his hands behind his back and punches the boy in the head while trying to restrain him. In his post, Wolf demanded the police officer be held accountable for using excessive force on a child.

“I am pro police, but I am not pro ABUSE!” Wolf wrote. “This individual and department must be held accountable for their actions. NO child, disability or not, deserves to be treated like this.”

Police were allegedly responding to a report of a possible assault or stabbing. In an interview with FOX40, Wolf said Preston got into an altercation with a 16-year-old boy who was allegedly bullying him. He stated Preston picked up “a piece of metal or a metal pole” to defend himself, and an adult intervened. The police reportedly found the 16-year-old before finding Preston, and according to KCRA, the 16-year-old boy had minor injuries that did not require medical attention. His family is reportedly not pressing charges against Preston.

The Vacaville Police Department announced it was investigating the incident in a Facebook post and claimed that its preliminary review indicated the officer did not know Preston was autistic. The Vacaville Reporter reported that the officer was on administrative leave. Several commenters criticized the response, saying the officer’s lack of awareness of Preston’s autism is no justification for use of force.

“I don’t think the officer NOT having knowledge of the teen’s disability should be the overall justification of his physical actions towards a minor,” one commenter wrote under the police statement. “What ever happened to deescalating a situation.”

“Whether he had special needs or not is that how your officers are trained?” another Facebook user questioned. “No weapon in sight and then throw down mount and punch?”

“The officer was so angry over what?” one person commented. “The child complied AND was on the ground. If the officer isn’t fired how can citizens trust the judgement of the department?”

A 2017 study in the Journal of Autism and Developmental Disorders estimates that 20 percent of autistic youth are stopped and questioned by the police before the age of 21. Autism-specific law enforcement training is growing, but according to a report by Spectrum, the training is still new and varied across departments. It is unclear if the Vacaville Police Department has autism-focused training programs.