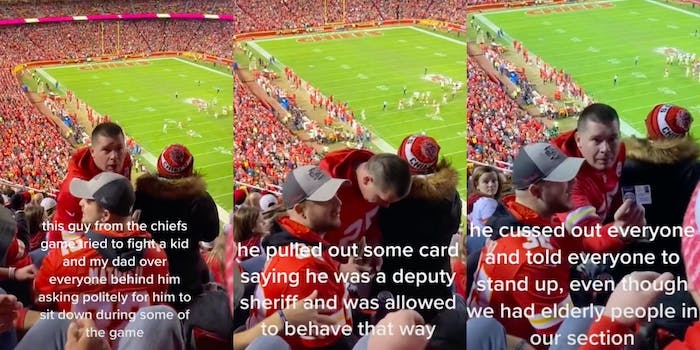 ‘Someone like this shouldn’t be allowed to protect the community’: Man allegedly tried to fight kid at football game, flex that’s he’s a cop

A man, filmed in a viral TikTok, allegedly tried to fight a kid then flex that he’s a cop while at a Kansas City Chiefs football game.

A TikToker, Hannah (@hannbanan27), posted the video featuring the man. “This guy from the Chiefs game tried to fight a kid and my dad,” Hannah notes via a text overlay. Hannah claims via the text overlay that the man was upset that “everyone behind him” politely asked him to sit down “during some of the game.”

“He pulled out some card saying he was a deputy sheriff and was allowed to behave that way,” the text overlay continues.

The sound is drowned out by the text-to-speech effect, which reads aloud the text overlay in an automated voice.

However, the man does pull a card out of his wallet.

The text overlay alleges the man told everyone in the section, which included senior citizens, to “stand up.” In the video, he gestures at someone off-camera to come toward him.

“Someone like this shouldn’t be allowed to protect the community when he flaunts that he’s entitled to act this way,” it continues. “He’s the reason we have trouble respecting law enforcement, If he acts like this at a game, imagine what he’s like on duty.”

The text overlay claims security came over but “didn’t do anything” to quell the situation.

The alleged deputy sheriff’s identity remains unknown, and it’s unclear which sheriff’s office he works for.

The video has amassed over 2 million views and over 149,000 likes in under a week.

“Aight Secret Agents of Tiktok, do your thing and find this dude…see if he’s a cop and maybe let his chief see how he acts outside of ‘work’,” one person wrote in the comments section.

Others suggested that the TikToker contact the “front office” and report the incident because they would “take it more seriously.”

There were also jokes made at the man’s expense that expressed skepticism over his profession. “Plot twist – it was a library card,” a TikTok user commented. Another said, “I love how he thinks by showing his Dave n busters card is gonna do something.”

The TikToker also said in the comments section that they are offering $300 to anyone who could identify the man.

The Daily Dot reached out to the creator via TikTok comment and to the Kansas City Chiefs via email for comment.