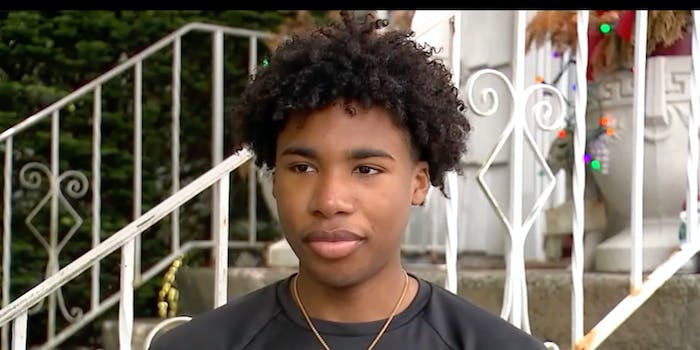 The student was reportedly arrested and charged with breach of peace and racial harassment.

A Connecticut high schooler was arrested after calling a classmate racial slurs on social media, according to various reports.

According to ABC 7, the Fairfield Warde High School student took a photo of Jamar Medor, who is Black, and posted it to Snapchat writing: “Why is there a [N-word] in my homeroom? Why is he not in chains?”

“I just had no words when I saw it,” Medor told WABC of his response to the photo. “I was so confused.”

Medor’s mother—Judith Medor—was similarly puzzled. “My mouth just dropped because I couldn’t believe it,” she said. She also says she fears for her son’s safety.

“I’m not going to rest until I find justice for my son,” said told Patch. “I stand against racism, so we’re going to have to do anything in our power to stop it.”

Jamar Medor received the racist video from students at a different school the weekend after the Snapchat was posted.

The 16-year-old student who sent the photo was arrested and charged with breach of peace and racial harassment, ABC 7 reports. The student was also suspended for 10 days; however, more than 29,000 people have signed a petition calling for their expulsion.

“Black, Indigenous, and People of Color (BIPOC) shouldn’t have to encounter this type of racist harassment from other students in a predominantly white institution,” the petition reads. “Fairfield Warde High School should take racism seriously, and the student who posted the racist comment should be expelled immediately.”

Fairfield Warde High School is located in one of the wealthiest areas of the U.S., Daily Mail reports. According to data obtained by Niche, just 3% of students at Fairfield Warde are Black.

Update 3:45pm CT, May 16: When reached for comment by the Daily Dot, the Fairfield Police Department confirmed in a statement that the 16-year-old “was arrested and charged with Ridicule on Account of Creed, Religion, Color, Denomination, Nationality or Race and Breach of Peace in the 2nd Degree.”

“The parents of the respective students involved have been notified of the incident,” it said. “Due to the age of the offender the department will have no further comment on this incident.”

The Daily Dot has reached out to Fairfield Warde High School.